I cannot explain why I was drawn to the teaser headline “Vampires make ground in La Push” from MyNorthwest via their Twitter feed. I expected news about a gathering of Twilight fans or something.

When I clicked on the link, this is what I saw: 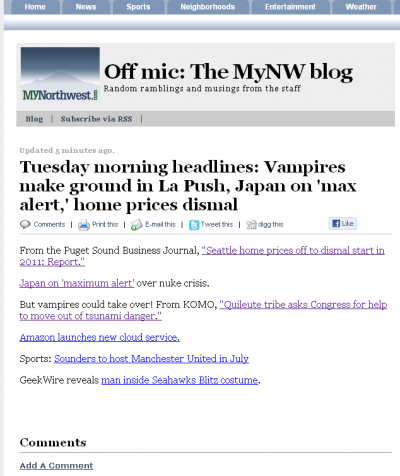 The only article that mentions La Push is “Quileute tribe asks Congress for help to move out of tsunami danger:”

LA PUSH, Wash. — A Washington state tribe says its answer to the danger of a tsunami is moving its village to higher ground.

Now, the Quileute Tribe is asking for Congressional help with the move.

When members of the Quileute tribe saw a tsunami destroy Japanese cities, their first reaction was horror. The second: that could be us.

Oh? “Sucking off the government teat” to relocate their village to higher ground…is that what they were getting at by “vampires”?!?

I’m sure it’s an innocent mistake.