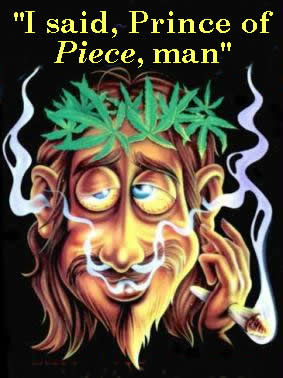 The Supreme Court just saved Jesus from peer pressure to try drugs. Today the Court ruled 5 to 4 against a student displaying a “Bong Hits 4 Jesus” banner at an off-grounds school event.

I suppose we can call this the “free-expression hits 4 Jesus” case.

The school principal thought the banner promoted drug use and, as a consequence, she confiscated the banner and suspended the student. The student, Joseph Frederick, simply thought the slogan was funny—and that it would attract the attention of TV crews covering the journey of the Olympic torch.

[t]he First Amendment does not require schools to tolerate at school events student expression that contributes to those dangers.

“Danger” refers to the harm of illegal drug use—in this case, the harm of drug use by a vulnerable Jesus.

This goes to show that conservatives really are humor impaired. Further studies will be needed to determine if this humor impairment syndrome (HIS) has some genetic underpinnings, is caused by environmental toxins, or whether it reflects a deficient childhood nutritional environment—you know, like being nursed by hyenas to avoid exposing the child to its mother’s breasts. I’m betting on the hyena scenario.

…the school’s anti-drug policy “cannot justify disciplining Frederick for his attempt to make an ambiguous statement to a television audience simply because it contained an oblique reference to drugs.”

The majority, apparently, equates promoting drug use for Jesus—a man who was executed in the First World War on Terror some 2,000 years ago, isn’t a citizen of the U.S., would take bong hits in the privacy of his own kingdom which, in any case, is outside the territorial jurisdiction of the U.S.—might have the pernicious effect of inducing HIS-afflicted conservative students to take up drug use. (In other words, Jesus is just a gateway target.)

The same reasoning might prohibit “Bong Hits 4 Hitler,” since it could still provide pernicious inspiration for some HIS-positive conservatives.