Yesterday I alluded to a new Survey USA poll that I thought would be released in a day or two for the Senate race between Sen. Patty Murray (D) and foreclosure seminar motivational speaker Dino Rossi (R). Well…it happened today.

This is the fourth poll in a row that has Murray leading Rossi. In fact, over the past month, there have been nine polls in this race (not including those released by the candidates or political parties). Murray has led in seven of the nine polls. Yeah…Rossi has a pair, but they are really pretty tiny (+1 and +3) compared to Murray’s (+3, +7, +13, +1, +1, +2, +5).

A Monte Carlo analysis of the SurveyUSA poll gives Murray 699,651 out of a million simulated elections. Rossi wins 290,266 times. In other words, in an election held now, Murray would have a 70.7% chance of beating Rossi, given the evidence offered in this poll. Here is the distribution of simulated election outcomes: 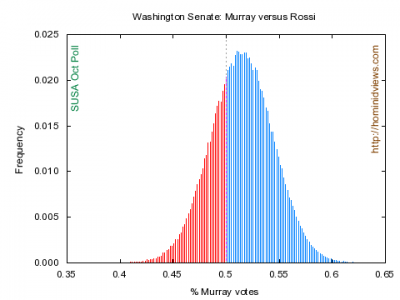 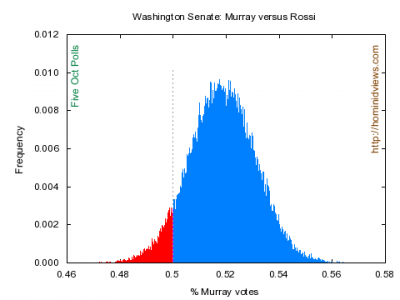 I’ve now written about new polls in this race for five days straight. If tomorrow bring us another poll then we can declare it WAPollpalooza week. And then maybe I can get some rest on the seventh day….