Rasmussen released a new poll today in the race between Sen. Patty Murray (D-WA) and real estate opportunist Dino Rossi. The poll of 750 likely voters, taken on 28 Sept 2010, has Rossi (R) up by 1% (48% to 47%). If we consider this the only poll of relevance, a Monte Carlo analysis can suggest the probability of each candidate winning in a hypothetical election held today. From a million simulated elections of 750 people voting for each candidate probabilistically at the observed frequencies, we find that Murray wins 416,583 times and Rossi wins 573,402 times. That is, the best evidence from this poll suggests that, in an election held today, Murray would win with a 42.1% probability and Rossi would win with a 57.9% probability. Here is the distribution of outcomes from those million simulated elections: 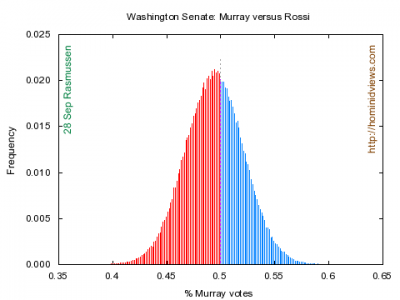 An interesting thing about the Rasmussen poll is that the actual polling work is done by a company called Pulse Opinion Research, LLC. As it happens, this is the same firm that did a FOX News poll just three days earlier. That poll of 1,000 likely voters taken on 25th of September had Murray leading Rossi 48% to 47%. There may some be differences in the likely voter model preferred by Rasmussen and Fox, but such an explanation isn’t really necessary to explain the differences. There is nothing at all inconsistent between the polls. Given the sample sizes, the polls do not really differ. Rather, they suggest that the race is close. We can pool the two polls to get a better idea of the race according to the methods used by Pulse Opinion Research. A Monte Carlo analysis using a sample size of 1,750 “voters” and pooled candidate preference percentages gives Murray 513,406 wins to Rossi’s 479,748 wins. In other words, the two polls taken by Pulse some three days apart suggests that, in an election held over the past week or so, Murray would win with a 51.7% probability.

But why restrict ourselves to a single pollster? In the past two weeks, there were four polls taken. The earlier two polls were by Survey USA giving Murray a 50% to 48% lead over Rossi in a sample of 609 likely voters taken from 19-21 Sept, and an earlier Rasmussen poll (750 likely voters) taken on 14th Sept, showing Murray leading Rossi 51% to 46%. When we pool these four polls, we get a respectable sample size of 3,109 individuals of which 2,987 went for either Murray or Rossi. Of these, 1,520 ( 48.9%) were for Murray and 1,467 ( 47.2%) were for Rossi. After a million simulated elections, Murray won 743,815 times and Rossi won 251,927 times. In other words, the combined evidence from four polls taken by two polling firms over the past two weeks suggests that Murray has a 74.7% probability of beating Rossi. 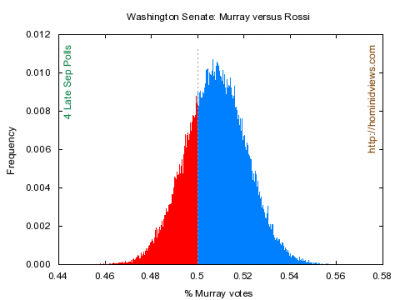 Does this reflect a decline in Murray’s support? I think it does a little. As this graph shows, the four most recent polls all fall within each other’s margin of error: 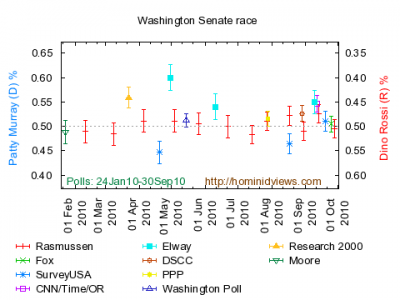 But the next two earlier polls, by CNN/Time/Opinion Research and Elway showed a significantly better lead for Murray than this most recent poll does, suggesting that there has been a real decline for Murray from a month ago. Alternatively, it could be just bad luck of the draw in Rasmussen’s most recent poll, since other than the most recent poll, all of the previous five polls fall within each others margins of error. So which is it? Hey…I report, you decide.