SurveyUSA has just released a new poll for the Washington state gubernatorial race. The poll of 634 people shows Governor Christine Gregoire leading Dino Rossi 50% to 46%. The 4% spread is an improvement for Gregoire from the 1% spread in the early April SurveyUSA poll and the 1% spread in a late March Rassmussen poll.

Clearly, the current SurveyUSA poll results are within the 4% margin of error for the poll. What this really means is that the probability of Gregoire beating Rossi is less than 95%, based on what we can tell from a relatively small sample. But we can do better than to just dismiss the poll as “a statistical tie.” Instead, we can estimate the probability that Gregoire should win, given the information available from a sample of this size. This can easily be calculated mathematically. But it is more intuitive to simulate elections and simply count the number of Gregoire wins and Rossi wins.

The results give Gregoire 859,651 wins and Rossi 132,432 wins. This suggests that Gregoire has something like an 86.7% probability of beating Rossi if the election were held right now, and Rossi has a 13.3% chance of beating Gregoire. 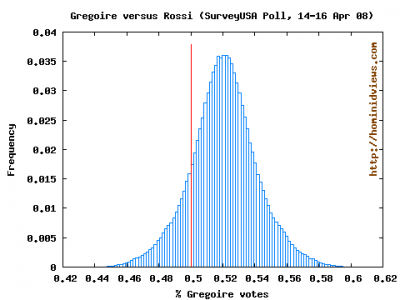 Things may change between now and November, but if I had to bet the (server) farm on a candidate right now, my money would be on Gregoire.