A new KING-5/Survey USA poll in the Seattle Mayoral Race was released today. This race has Mike McGinn facing off against Joe Mallahan. Just last week, a Washington Poll poll had Mallahan leading McGinn by 44% to 36% with 20% undecided. The results suggested that Mallahan had an 89.9% probability of winning.

Today’s poll of 586 people (taken over the weekend) shows a tighter race with Mallahan leading McGinn by 45% to 43%. A Monte Carlo analysis (methods) consisting of 1,000,000 simulated elections using the proportions and sample size observed in this poll shows Mallahan winning 635,831 times and McGinn winning 352,638 times. Statistically, the results are a tie. But Mallahan has a small edge with a 64.3% probability of winning; McGinn has a 35.7% probability of winning.

The distribution of election outcomes from the simulation says it better than numbers: 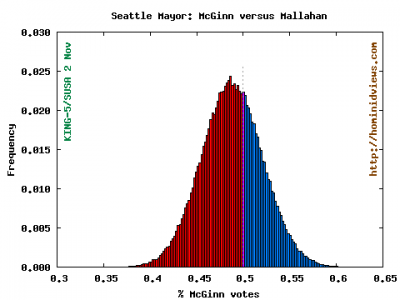 The red bars on the left are Mallahan wins, and the blue bars on the right are McGinn wins.

There are a number of possible confounders here that make this extremely close race even more uncertain. Most obvious is the age discrepancy in support which The Stranger’s Eli Sanders points out may lead to some systematic (statistical) bias:

Remember, too, that SurveyUSA only reaches voters with land-lines, and that some of McGinn’s strongest support is among younger voters—who frequently only have cell phones.