(Oddly enough, I was one of the 500 randomly selected Washington state voters who was called and chose to participate in this poll.)

The +6% spread in this poll shows the race tightening slightly from the +9% found in the late June Elway poll, but better than the +3.5% found in an early June SurveyUSA poll, and on par with the +7% found in last month’s (early June) Rasmussen poll.

Gregoire won 900,804 of the simulated elections and Rossi won 90,599 times. This suggests that Gregoire has something like a 90.9% chance of beating Rossi (if the election were held now) and Rossi has a 9.1% probability of winning. A statistician would point out that Gregoire’s lead in this poll is within the margin of error (i.e. her probability of winning is less than 95%). 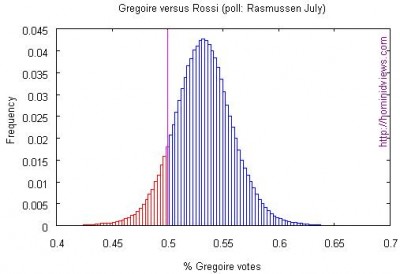 This current poll makes this the ninth consecutive poll in which Gregoire has led Rossi. It is highly unlikely that Gregoire’s lead is due to chance (sampling error).