A new poll in the Washington state gubernatorial race was released yesterday. The SurveyUSA poll conducted from June 7th through the 9th asked 637 likely voters who they would vote for in an election held now. Governor Christine Gregoire received 50.4% of the “votes”, Dino Rossi received 46.9%, “other” received 1.4%, and only 1.3% were undecided.

The current SurveyUSA poll results are within the 4.0% margin of error, which means that, given a sample of only 637 likely voters, the probability that Gregoire’s lead is “real” (in an election held now) is something under 95%. This is commonly called a “statistical tie,” but we can do better than that. We can estimate the probability that Gregoire would beat Rossi (and vice versa) in an election held now. 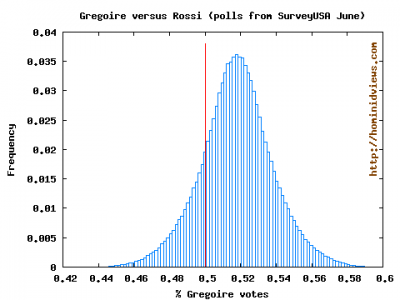 The good news for Rossi is that this poll places him back in the running, unlike the previous Rasmussen result. Rossi may have been “unlucky” during that poll—that is, just by chance, perhaps too many Gregoire supporters were polled. Alternatively, Gregoire may have experienced a large surge in support last month.

The bad news for Rossi is that Gregoire has held the lead for six polls in a row now, and has led in seven out of the eight polls taken this year. (The last time Rossi led was in a March 5th Rasmussen poll, in which he held a slim +1% advantage.)

With poll after poll showing Gregoire up, it becomes very difficult to attribute her leads to chance. In other words, the consistency across polls suggest that Gregoire really does hold a solid lead over Rossi—at least at this point in the election season.