Another poll has been released in the race between real-estate salesman and two-time gubernatorial race loser Dino Rossi (R) and Sen. Patty Murray (D). The Survey USA poll has Murray leading Rossi 50% to 48%. The survey included 609 likely voters.

As has been noted for their previous polls, something is “off” with Survey USA for this race. N in Seattle (among others) noted their “Metro Seattle” crosstabs were abnormal in the previous poll. Goldy thinks they’re still not quite realistic.

As usual, I’m interested in what the poll has to say about who would win in an election held now. Following a million simulated elections of 609 individuals voting at the proportions observed, Murray wins 635,301 elections and Rossi wins 353,991 times. In other words, this poll provides evidence that Murray would have a 64.2% probability of beating Rossi right now. Here is the distribution of outcomes: 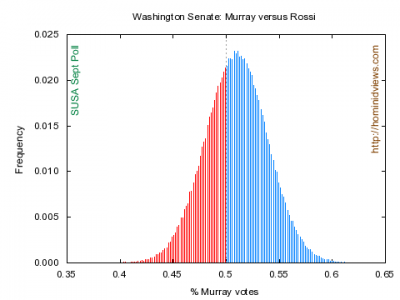 With this new poll today, we have had a total of four polls taken in September:

Murray has led in all four of these polls. In fact, she has earned at least 50% in each of the last four polls.

If we pool the respondents from all four September polls, we get a sample of 2,765 voters of which 2,658 went for either Murray or Rossi. Murray leads in the pooled sample 51.2% to 44.9%. Another Monte Carlo analysis gives Murray 991,344 wins to Rossi’s 8,375 wins. The evidence of these four polls indicate that Murray would have a 99.2% chance of beating Rossi in an election held this month. 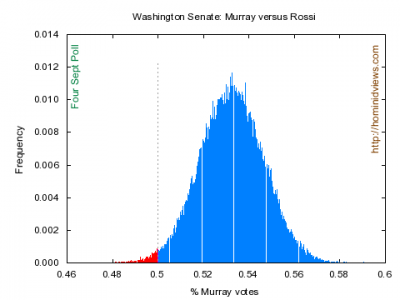 Finally, here is the complete polling history for this race: 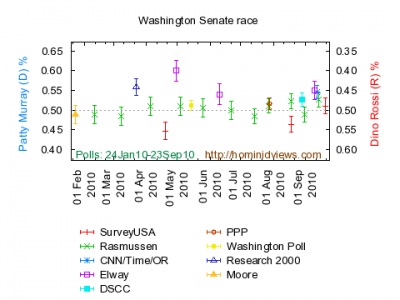 At this point, we can no longer debate whether or not Murray is vulnerable—there just isn’t much evidence for that. Perhaps the debate should turn to whether or not she will defeat Rossi by a single-digit or double-digit margin. Discuss.