This is what U.S. military spending looks like over a little more than 2 decades: 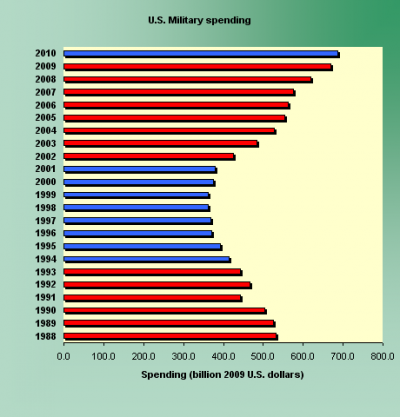 So much for the Peace Dividend that followed the end of the Cold War. Apparently, fighting a rag-tag bunch of cave-dwellers requires the same level of funding as keeping up with mighty Soviet Union.

If we want a return to the glory days of a balanced federal budget–you know, like we saw during the last year of the Clinton administration, we should

And if you believe that military spending pays us back by stimulating the economy, think again. A study by University of Wisconsin–Milwaukee political scientist Prof. Uk Heo finds:

Military spending, at least at today’s levels, turns out to be a really, really lousy investment.