It’s campaign mailer season, and as usual, hilarity ensues! But I’m particularly amused by the Washington State Republican Party’s strategy this year of running against itself.

First there was the state Senate Republican Campaign Committee’s bizarrely unselfconscious mailer accusing Democratic challenger Matt Isenhower of being a closet Republican who is “willing to say anything to get elected. Just like his mentors: George W. Bush and Dick Cheney.” I know—weird, right? And now there is this mailer lauding Republican Mark Miloscia for “[standing] up to the party bosses and the out-of-touch politicians”—a mailer entirely paid for by… wait for it… the Washington State Republican Party! 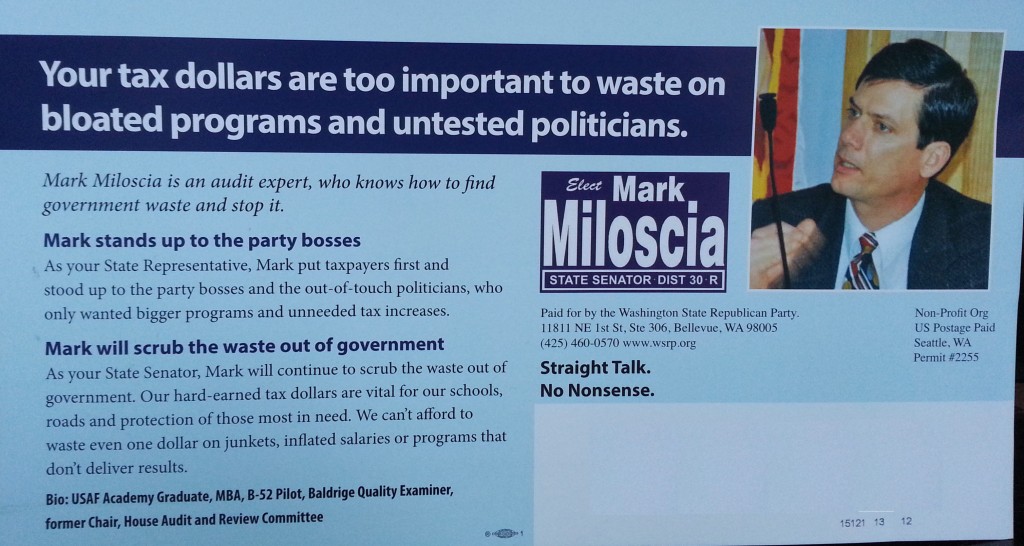 Of course, what the WSRP is really congratulating Miloscia for is standing up to the other party’s bosses by, you know, switching parties. But this overt attack on “party bosses” by (literally) party bosses, would be kinda like McDonald’s urging Burger King customers to avoid eating artery-clogging, salt-laden, E. coli-ridden burgers. Hard to imagine that’s good for business in the long term.

Again, the Republican Party appears to have a branding problem when its best campaign strategy is to run against itself.