Geov and I were making our way down the pedestrian mall from one convention site to another the other day. The hot Denver sun enticed us to take one of the free shuttles that runs up and down the mall. We waited.

It seems the shuttles were temporarily shut down—perhaps something important was happening. We inspected the relatively quiet landscapes for a sign. Minutes later something stirred down the road. 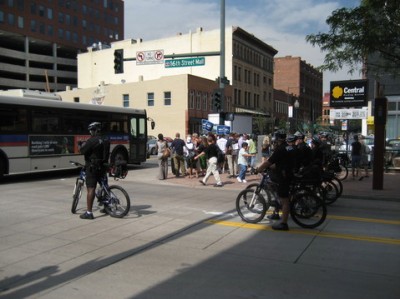 It was a pro-McCain march. And a law abiding bunch of marchers they were, too. As the marchers waited for the light to change, Geov and I snapped photos and debated whether there were more marchers or more bicycle police. (Really…you can see the entire “rally” in the photo.)

That prompted one of the bicycle cops to swing around in front of our shuttle stop. He looked at our group through those menacing dark glasses and asked, “Did somebody say ‘four more beers?'”