The 2010 election vote tally is finally over in Washington state. Yesterday was the deadline for counties to certify results. So there is a bit of unfinished blogging business.

Throughout the election season, I posted analyses of just about all the polls in the race between Sen. Patty Murray (D-WA) and Washington’s highest profile real estate salesperson, Dino Rossi (R). There were some ups and downs in the poll, but mostly ups for Murray and downs for Rossi. Our would-be Senator from Wingnutopia only led in three of the fifteen polls taken after the first of October: 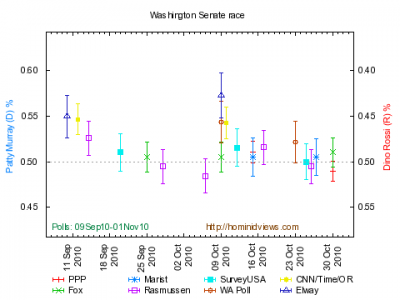 We saw countless examples of a breathless media describing a close finish based on flip-flopping polls, and apparently ignoring that Murray led in eleven of the last fifteen polls that included one tie. How close was it in the end?

I find good news and bad in this final result. After analyzing the last poll in the race, I wrote:

Make of it what you will. The polls say it is a tie or a very small Murray victory. So what do I think will really happen tomorrow? First, let me state that I obviously want Murray to win. Even so, in my professional life, I am a scientist, and evidence is exceedingly important to me, even if it goes against my desires or pet theories. So here goes….

As I outlined at the end of this post there is a discrepancy between live interview polls and robopolls in the Washington Senate race that has also been seen nationally. I offered an explanation (i.e. a theory) as to why the discrepancy exists. It all leads me to believe that robopolls are systematically underestimating Murray’s performance in this race. If the theory is correct, I expect Murray to come away with about a +5% advantage over Rossi after all the votes are counted. But I concede that tomorrow night, reality will confront theory.

The good news for me (I guess) is that I freakin’ nailed it! (Suck on that, Mr. Cynical!)

The bad new (and being a little more serious) is that polling cannot continue to be practiced as it has been done. While it may have been an enthusiasm gap problem that caused many robopolls to underestimate Murray’s performance earlier in the race, right near the end that pattern was a little less strong. Robopoll and some live interview polls underestimated Murray’s performance.

Interestingly, the Washington Poll was the most accurate of the late polls, predicting +4% for Murray. After that it was FOX News (+2), Marist (+1), SurveyUSA (tied), Rasmussen (-1) and Public Policy Polling (-2). (Elway and CNN/Time/OR did their last polls three weeks out and got +8 and +13, but we have no gold standard that far out—i.e. an election—as a three to eight point decline in three weeks cannot be ruled out.)

So what was it? The other possibility causing polls to lowball Murray’s lead was “the cell phone problem.” The problem has been discussed for years, but it didn’t really seem to materialize in 2008. It did in 2010 according to a new Pew study:

The number of Americans who rely solely or mostly on a cell phone has been growing for several years, posing an increasing likelihood that public opinion polls conducted only by landline telephone will be biased. A new analysis of Pew Research Center pre-election surveys conducted this year finds that support for Republican candidates was significantly higher in samples based only on landlines than in dual frame samples that combined landline and cell phone interviews. The difference in the margin among likely voters this year is about twice as large as in 2008.

Across three Pew Research polls conducted in fall 2010 […] the GOP held a lead that was on average 5.1 percentage points larger in the landline sample than in the combined landline and cell phone sample.

The bottom line: the cell phone problem can no longer be ignored.