Sen. Maria Cantwell (D-WA) is facing re-election and a new Elway poll takes the pulse of the electorate. Josh at Publicola writes.

First the bad news for U.S. Sen. Maria Cantwell, who’s up for reelection next year: A new Elway poll finds her “Job Performance” rating at 52 percent “negative” to 42 percent “positive.” (It was nearly the exact opposite in 2005, also a year out from reelection, when her numbers were 52 positive vs. 38 negative.)

And that pretty much guarantees Cantwell a spot on the November ballot.

You may recall that Cantwell beat Mike McGavick 56.9% to 39.9% in 2006. Clearly, she can do a lot worse in 2012 and still come out on top. And as flawed as McGavick was, it is not clear that the Republicans have anyone better in the wings. Let’s explore some other polling results for Cantwell in order to better frame the Elway poll. 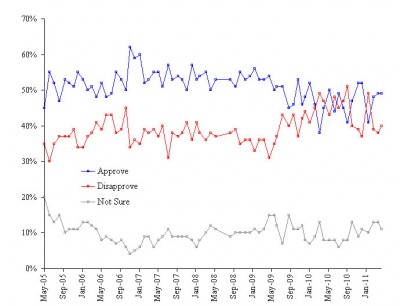 Clearly, after that May 2005 poll, Cantwell’s approval increased dramatically and stayed relatively high until the Summer of 2009. Since then Cantwell’s approval has been more volatile. Six of the last 20 polls since then show her with higher disapproval, but with an overall trend of a higher approval. And given the absence of a strong opponent on the horizon, I am simply unwilling to fret over a single Elway Poll….