Until the end of the conventions, it was not uncommon to see a media article about how close the presidential race was at the time. If anything, the articles were based on national head-to-head polls, and generally showed Obama a point or two ahead of Romney.

Since the conventions, Obama has been gaining ground in the national polls. In fact, the last such poll that wasn’t Rasmussen that showed Romney with a lead was this Gallup Tracking poll from late August.

If you’ve followed my, or almost anyone else’s, analyses of state head-to-head polls it is no secret that Romney is in deep trouble. No matter what the national polls say, it is the electoral college (and, in a tie, the House…and, you know, sometimes the Supreme Court) that elects the President. The simulated electoral college contest has Romney losing consistently and badly this entire election season.

The reason appears to be that Obama is polling stronger in swing states. Credit for this has been attributed to a better-than-average economy in particular swing states, and to the Obama campaign’s early advertising blitz that started defining Romney even before he was the party’s nominee (and with a little help from Romney’s Republican opponents).

The other explanation, which is more of an amusement than a real explanation, is that the polls are all skewed! It’s attributed to the polling this year being “the worst it’s ever been” by political pundit and lower phalange fetishist Dick Morris.

Alternatively, it is a vast left wing media conspiracy!!!1!1! Politico has a nice write-up about Teh Great Polling Conspiracy of 2012. I think Josh Marshall summarized it best:

…having been through several of these cycles, if you’re theory is based on systemic error on the part of basically all pollsters, you’re in for a long election night.

So the following information can be read in two ways. If you think the polls, when taken en masse come out about right, on average, then I will present to you a measure of just how badly Romney is losing. If you are a Poll Truther, the following information provides solid evidence of just how skewed the polls are (if you presume Romney is really leading).

Here’s what I did. I took the results of last night’s analyses (umm…after the correction). And I reran the analysis, adding a bias in Romney’s favor to each poll included in the analysis. The bias (or skew) was a fixed percentage. I began an 0% and stepped up by 1% at a time through 10%. Here is a summary of the results for Obama’s median electoral votes with 95% confidence intervals: 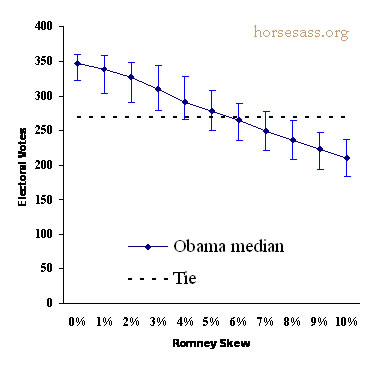 The graph is clear…to eke out a win, Romney has to move the electorate across the board by a remarkable 6%. That is, he is 6% behind in the polling now. That is a larger margin than the 3.5% margin in the Real Clear Politics average of national polls. That’s because the math of the electoral college places more importance on certain states—and Romney need to do more to win those states.

To win with at least a 95% probability, Romney needs to shift things by 8%. To have the kind of lead that Obama now enjoys—with a solid 100% probability of winning—Romney needs a 10% shift.

Of course, this model is a bit simplified—I skew every poll for all states. It isn’t all states that have to be moved; rather it’s just a handful of “important states” that need moving. I mean, skewing Utah and Mississippi doesn’t really accomplish anything for Romney, and Massachusetts and D.C. aren’t going to be swung over no way, no how.

Here is the electoral map of a Romney victory scenario—presuming he moves voters in his favor by 6%:

Ohio and Pennsylvania plain gone—the polling now suggests they are out of reach for Romney even in this most extreme scenario where he shifts everything by 6%. Instead, a “Romeny + 6%” victory includes Florida, North Carolina, Virginia, Iowa, Colorado, New Hampshire, and New Mexico. Oh…and Nebraska-2, which is tied when we remove the skew.

I’m not suggesting the election is over. But it looks like Romney has an almost insurmountable task ahead of him if he is to leave the rolls of the unemployed.