The most polled gubernatorial race in the country this election season, hands down, is Washington state. The rematch between Dino Rossi (“G.O.P. Party”) and Gov. Christine Gregoire (D) has had 36 polls taken, starting in August of 2005, just two months after a court declined to overturn Gregoire’s victory.

And now we have one new SurveyUSA poll to add to the collection. The poll of 714 people, taken on the 11th and 12th of August, shows Gregoire leading Rossi by a slim 50% to 48%.

That makes four polls all taken within the last three weeks. As can be seen in this figure of polling over the last three months, the race has scarcely moved provided one ignores those Elway polls. 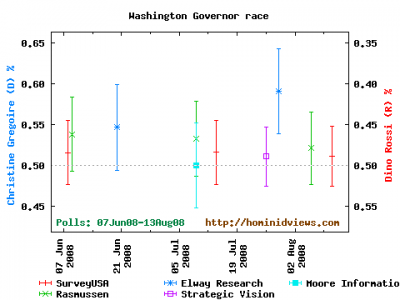 Mr. Elway has offered a defense of his poll numbers, perhaps in response to a somewhat “underinformed” Eric Earling commentary. Elway discusses sampling differences (registered, known voters versus random digit dialing used by national pollsters), different modes of communications (humans used by Elway versus computer used by SurveyUSA and Rasmussen), question wording, and party identification (Elway uses the Washington state ballot labels). I think Elway’s arguments are all reasonable, and given Elway’s smaller sample size, I am not surprised to see this magnitude of difference between Elway compared to Rasmussen and SurveyUSA. Still, I’m not going to declare that Elway is “right” and the others are “wrong.” There is simply no way to know which pollsters have (statistical) bias until one can observe the performance against a number of actual elections. My preferred strategy is to take ’em all, and combine multiple polls that are close together in time, and hope any biases cancel. 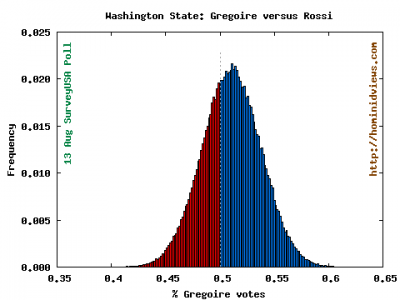 The more interesting analysis, however, includes all four of the polls taken in the last three weeks. This seems reasonable if we are allowed to assume that voter opinion has remained relatively static over these three weeks (i.e. no breaking scandals, “Macaca” moments, natural disasters, etc.)

The four pooled polls mentioned above give Gregoire 49.3% of the “votes” and Rossi 44.5% of the “votes”, with 6.2% undecided. There were 2,272 people surveyed who selected either Rossi or Gregoire. The Monte Carlo results suggests that Gregoire would win an election held now with a 95.9% probability and Rossi would win with a 4.1% probability. Here is the distribution of vote outcomes for the combined analysis: 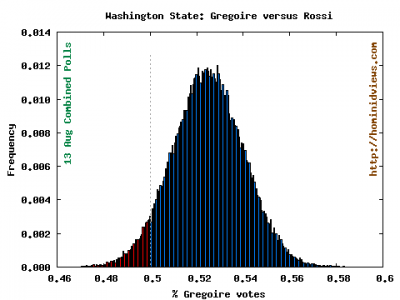 Here are a couple of observations that back up these results. The last time Rossi led in a poll was in February. There have been 16 polls taken since then. One of those polls was a tie and Gregoire led in the other 15. Before that, one has to go back another seven polls, back to November 2006, before finding this poll in which Rossi led.

The take-home message is that (1) Gregoire has repeatedly held the lead in this race. It is highly unlikely that this has happened by chance (i.e. the lead is almost certainly real). (2) There has been very little movement in the polling numbers for Rossi or Gregroire over the last 1.5 years. (3) If the non-movement continues, Gregoire will almost certainly win a second term.