Chris Grygiel at Strange Bedfellows reports on a new Elway poll that looks at the Washington state gubernatorial race. I’ll get to Chris’ odd take on the results below, but first I want to examine the poll in some detail.

The current Elway poll results do fall within its margin of error. Statistically, this means that the probability of Gregoire beating Rossi is something under 95%, based on what we can tell from a relatively small sample.

While it’s easy to dismiss the results as a “statistical tie” (especially when…you know…it’s your candidate who is losing) poll results can be more informative than declaring a “statistical tie.” They allow us to estimate probabilities that Gregoire or Rossi would win in an election held now. 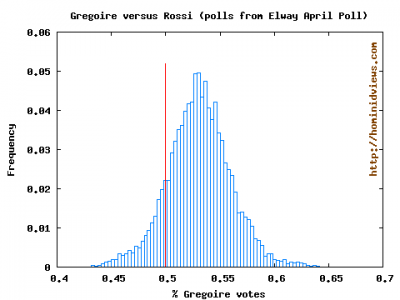 The area to the right of the red line shows wins for Gregoire and those to the left are wins for Rossi.

Chris Grygiel had an interesting take on this race (“Rossi gains on Gregoire in new poll,” reads the headline). He portrays Gregoire as losing ground with this poll, because she did even better in a January Elway poll. But the reality is that numerous polls have been taken since January, and the ground that Gregoire lost happened months ago.

Gregoire seems to have momentum on her side…at least, that’s what the recent polls say.