SurveyUSA has come out with their July poll in the Washington state gubernatorial contest. The poll shows Gov. Christine Gregoire (D) leading challenger Dino Rossi (GOP-Party) 49% to 46%. The poll of 666 people was taken from July 13th to July 15th.

The new poll follows the release of two other polls within the last week. A few days ago, Moore Information released a poll in this race that was taken from July 9 to July 10. It showed Gregoire and Rossi tied at 45%. The Moore Information poll was paid for by the Rossi campaign.

Last Friday, a poll was released by Rasmussen Reports, showing Gregoire leading Rossi, 49% to 43%. That poll was taken on July 9th. Gregoire led Rossi by single digit margins in all three June polls, including last month’s SurveyUSA poll that gave Gregoire a +3% advantage. 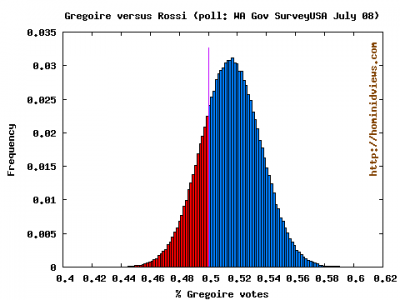 The second analysis combines the polls from Rasmussen Reports, Moore Information, and SurveyUSA. Since the combined responses were all taken within one week, from July 9th through the 15th, we could look at the combined polls as the best evidence available for who would win the election now.

Here is a plot showing the distribution of votes in the million elections for the combined polls: 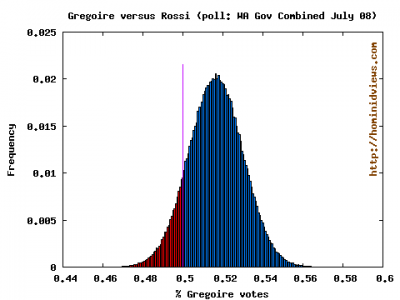 SurveyUSA also polled for the presidential election in Washington state. Sen. Barack Obama (D) leads Sen. John McCain (R) 55% to 39%. Obama’s lead is well outside the 3.9% margin of error for the poll.