The race between Gov. Christine Gregoire (D) and Dino Rossi (“G.O.P. Party”) remains only slightly clearer than mud today with the release of a new Strategic Vision poll. The poll shows Gregoire leading Rossi by +2% (50% to 48%).

The recent polling shows Gregoire with a small, but consistent, lead in the weeks leading up to the election: 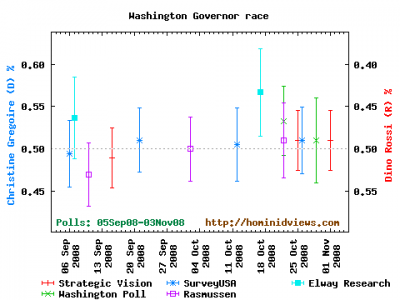 In fact, Gregoire has led in all eight polls taken since mid-October. The last time Rossi held the lead was in mid-September.