Because I’ve been systematically collecting and analyzing state head-to-head polls for every gubernatorial, senatorial and presidential race with an OCD-like fervor this election season, I’ve noticed a very strong pattern. In numerous states, for all three race types, I see examples of a Republican bump in the polls during the first half of September, only to see it fall again in the second half of September. 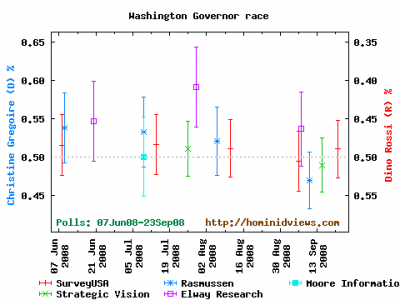 Call it a “Palin surge,” if you will. I call this transient phenomenon: “The Republican Awakening.” And it has largely diffused over the last week in races all over the country.

We see it here in the Washington state gubernatorial race. That’s my story, and I’m sticking to it—at least until a more compelling hypothesis that better explains the data pops up. Back to the objective analysis.

Gregoire’s lead is, clearly, within the margin of error. We can empirically determine the probability that either Rossi or Gregoire would win an election held now using a Monte Carlo analysis. 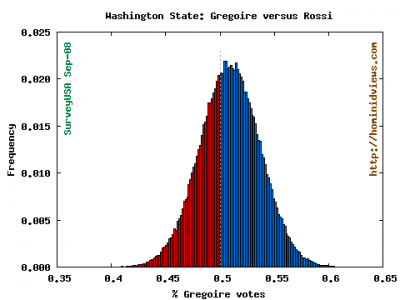 The same SurveyUSA poll finds Sen. Barack Obama leading Sen. John McCain 54% to 43%. The +11% lead is even wider than a week-older ARG poll that had Obama up 50% to 44%. And compare that to the two mid-month polls: a Strategic Vision poll and a Rasmussen poll that each gave Obama a smallish single-digit lead (+5% and +2% respectively).

See how the “Republican Awakening” thing has melted away?