There were 18 new polls from 14 states that add into today’s analysis. The polls show some races tightening up slightly, and McCain gets the better of it.

Now, after 100,000 simulated elections, Obama wins ’em all. Obama receives (on average) 366 to McCain’s 172 electoral votes—a gain of three votes for McCain since yesterday. The simulation results still suggest that Obama would win an election held today with 100.0% probability.

The long term trends in this race can be seen from a series of elections simulated every seven days using polls from 02 Mar 2008 to 02 Nov 2008, each time including polls from the preceding seven days (FAQ): 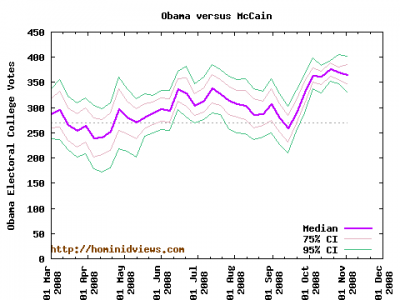