Yesterday’s analysis showed Sen. Barack Obama leading Sen. John McCain by an average of 368 to 170 electoral votes. Today there were 18 new polls representing 12 states released that weigh in on the score. The net result is a small gain for Obama.

A Monte Carlo analysis consisting of 100,000 simulated elections finds that Obama wins every one. Obama receives (on average) 370 to McCain’s 168 electoral votes—a gain of two. If an election had been held today, Obama would have had a near 100% probability of winning.

The long term trends in this race can be seen from a series of elections simulated every seven days over the period 22-Feb to 22-Oct. After a very slight period of decline, Obama is again gaining with time: 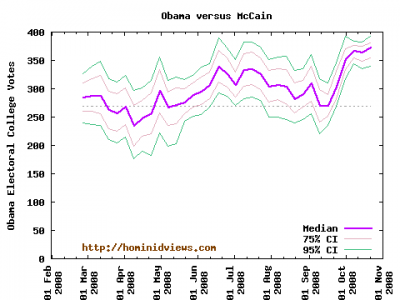