Election analyses are back! Today’s topic: Who will control the U.S. Senate after the mid-term elections?

We can answer this question by aggregating polling data that has been publicly released over the past year or so. The FAQ covers the methods but, in short, I am using polling data along with Monte Carlo simulation methods to assess probabilistic winners for each state and an overall probability of who will control the Senate.

Using voter preferences found in the past month of polls (whenever possible), 100,000 elections were simulated in each state. The result: Democrats had a Senate majority 82,684 times and there were 15,449 50-50 ties (these go to the Democrats, as VP Kamala Harris breaks Senate ties). Republicans controlled the Senate only 1867 times.

The results: If the election was held now, Democrats would have a 98.1% probability of controlling the Senate.

Nevada is looking more and more like a Republican pick-up. Democrat Catherine Cortez Masto, the incumbent, has been losing to Republican Adam Laxalt in the last 4 polls. These suggest she would only have a 17.3% probability of winning right now. This is a recent trend, as Cortez Masto has lead in most of the earlier polling this year. 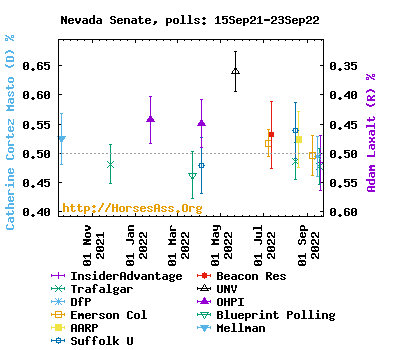 Ohio: In this Republican-held open seat, Democrat Tim Ryan is running against Republican J.D. Vance. Ryan has the polling advantage, but Vance has lead in the last three of six polls taken this month. Control of the Senate may turn on whether Ryan gets his mojo back. 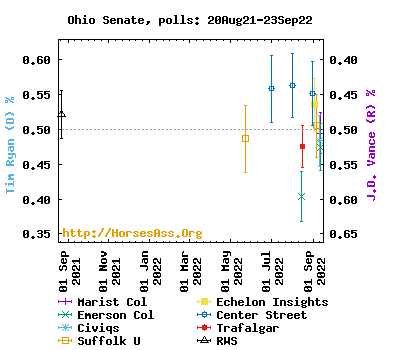 Pennsylvania: Pennsylvanians know a carpetbagger when they see one, and they look determined to send Dr. Mehmet Oz (R) back to New Jersey. By leading in every poll this year, John Fetterman (D) has amassed a convincing lead in the race. 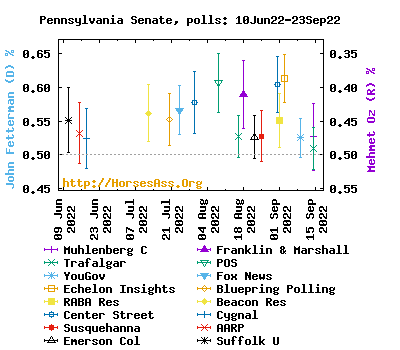 Wisconsin: Incumbent Senator Ron Johnson (R) just might lose his seat to Mandela Barnes (D). Barnes has lead in most polls this year. The race, based only on the last month of polling, is a tie. This race may be the one that control of the Senate hinges on. 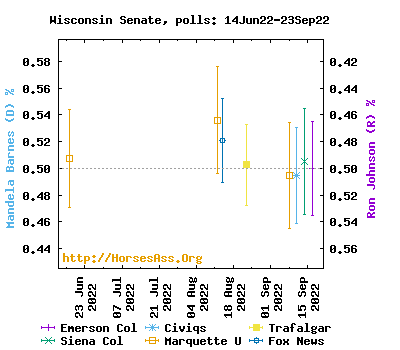 Back to the topic of control of the Senate, here is the distribution of seats from the simulations:* 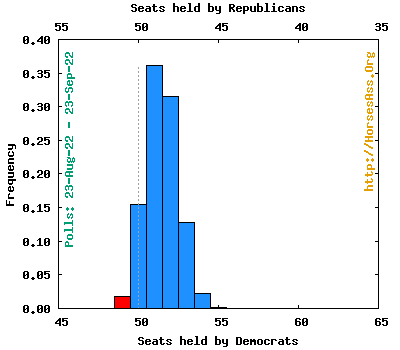 This graphs shows the probability of at least each number of seats controlled by the Democrats.* There is about a 40% chance of Democrats having at least 52 seats, the magic number that gives some immunity to Sinema—Manchin Dyspepsia. 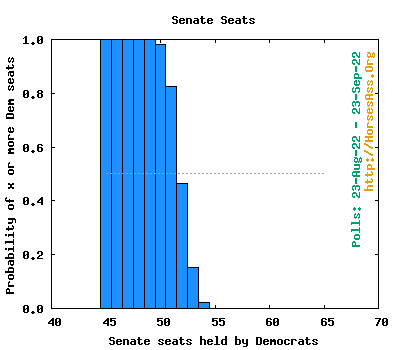 @ Current party in office
& An older poll was used (i.e. no recent polls exist).
*Analysis assume that independent candidates will caucus with the Democrats.

Note: This IS NOT an open thread. The comment section for this post is for discussion of things like polls, elections, control of the Senate, etc. Any poo-flinging is welcome at a nearby Open Thread. Thank you!