My previous analysis of the Senate races was a few weeks ago. If the election had been held in early October, the Senate would have almost certainly gone to the Democrats with, on average, 54 seats.

Some states have shown minor movement as more polling comes in. Going from 2 to 4 polls in Kansas has flipped the state from red to blue. Republican Roger Marshall was ahead with 82% chance of winning three weeks ago. Now, Democrat Barbara Bollier would have a 63% probability of winning that election today.

In the Montana race where Democrat Steve Bullock is challenging Republican Sen. Steve Daines, the race has swung further into Daines favor. He went from a 57% chance of Daines prevailing three weeks ago to an 80% chance now.

The Georgia seat 2 special election now has 5 polls that, in addition to polling the main event on Nov 3, put the top Democrat, Raphael Warnock, head to head against the top Republicans. I am using polls that assume Republican Sen. Kelly Loeffler will go up against Warnock in the 2-candidate runoff. But the results don’t change if Republican Doug Collins ends up in the runoff election. In both cases Warnock has a high probability of winning. 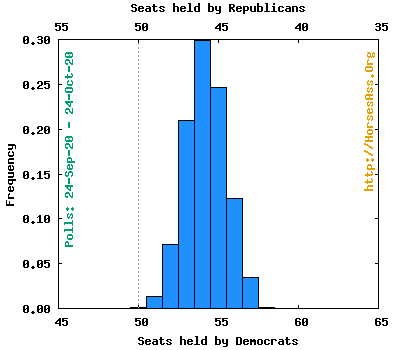 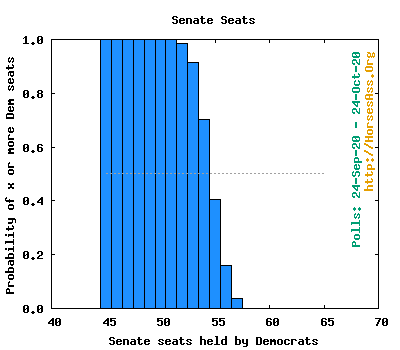