Now, after 100,000 simulated elections, Biden wins 100,000 times and Trump wins 0 times. Biden received (on average) 366 to Trump’s 172 electoral votes. In an election held now, Biden would have a greater than 99.9% probability of winning and Trump would have a less than 0.1% probability of winning. Biden’s small bump is pretty meaningless—such shifts are normal variation as old polls “age out” after they are more than a month old and new polls drop into the analyses.

Biden made gains in five states. Two new polls gives us a total of eight current polls for Iowa, and Trump’s 63% chance has flipped into a 65% chance Biden would take the state today. 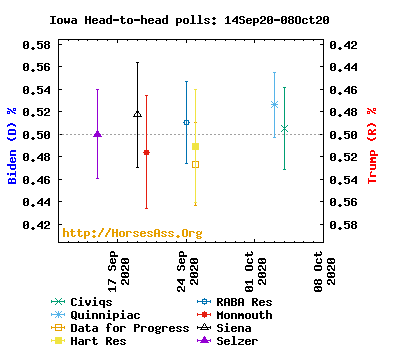 Biden also gains ground in Nebraska’s second congressional district with a new Biden+11 poll joining two other recent polls with Biden leading to boost his chances from 87% to 98%. This district went Republican in 2016 and 2012, but narrowly went for Obama in 2008. Two new Nevada polls give us a total of six in the Silver state, and Biden leads in every one of them. His chances have increased from 98% to 100% probability of winning an election held today.

North Carolina is close, but most of the polls are in Biden’s favor. There are twenty current polls and Biden leads in 16, Trump in 2, with two ties. Here is what the last month of polling looks like in North Carolina: 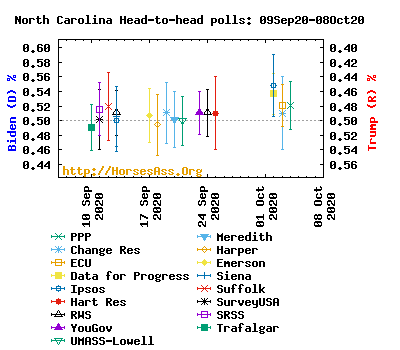 Ohio is even closer than North Carolina. A new Biden+1 poll gives us eight in all, with Trump leading in three, Biden leading in four, and one tie. The margins are small, and each candidate has a 50% chance of winning an election there today: 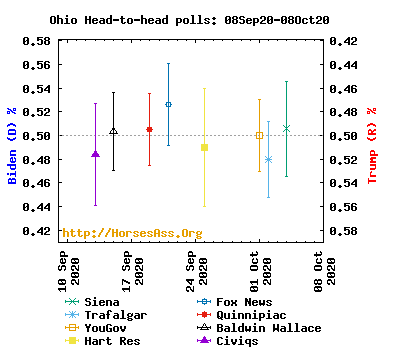 Here is the long term picture made from a series of elections simulated every seven days using polls from 08-Oct-2019 to 08-Oct-2020, and including polls from the preceding month (FAQ). 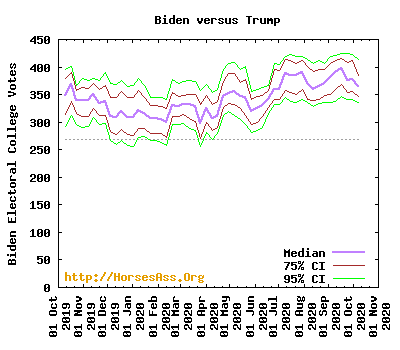 For an election held today, here is the distribution of electoral votes [FAQ] generated by the simulated elections: 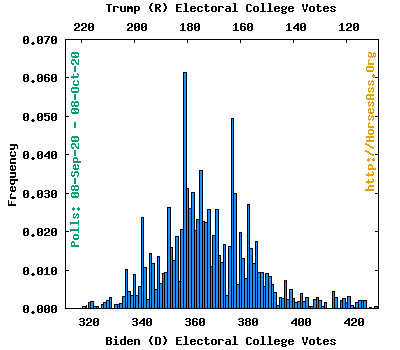