The poll also matched up Gov. Christine Gregoire (D-WA). (Right…Like that’s gonna happen.) She’s down 12% to McKenna and 4% to Reichert.

The poll sampled 610 registered voters and has a margin of error of about 4%.

I decided to grease the gears and wind-up the ol’ calculating machine to tabulate some probabilistic outcomes from these poll data. I’ve posted these Monte Carlo analysis on HA for many years now, but in case you want more details, see that (somewhat outdated) FAQ. Here are results for the Inslee match-ups.

In the Inslee versus McKenna race, a million simulated elections has Inslee winning 95,892 times to McKenna’ s 898,897 wins. That is, if the election had been held yesterday, Inslee would have a 9.6% chance of winning, to McKenna’s 90.4% chance. Here is the distribution of outcomes: 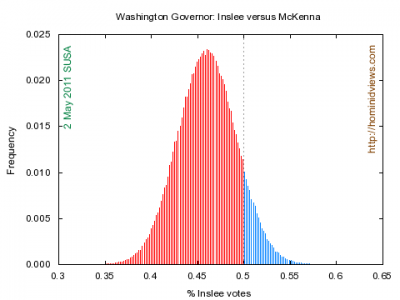 That’s a lot of red.

Less so in the Inslee versus Reichert match-up. Inslee takes 350,198 of the simulated elections to Reichert’s 638,521. That is, Inslee would have about a 35.4% chance of beating Reichert in an election held now, based only on the evidence collected by the poll. Here is the distribution of outcomes: 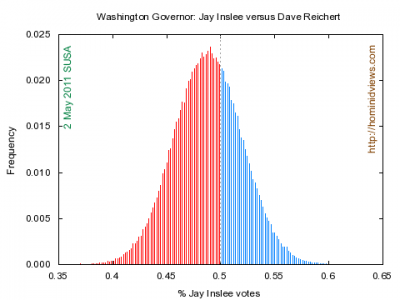 So…is Washington going all Wisconsin on us? Are we going to get our own replay of the radical right-wing War on Workers, War on Women, War on Railroads, War on Health Care, and relaxation of child labor laws, seen in other states with newly elected Republican governors? It could be, but not really based on these polls. They are taken way, way too early to have any predictive power for an election held in a year and a half.

If there is any message here, it is that its never too early to start working for the candidate that most closely reflects your vision of what Washington should be.