The top-dog Carnival Barker has a little memory problem (via The Smoking Gun):

Despite Donald Trump’s claim this week that he avoided serving in the Vietnam War solely due to a high draft number, Selective Service records show that the purported presidential aspirant actually received a series of student deferments while in college and then topped those off with a medical deferment after graduation that helped spare him from fighting for his country, The Smoking Gun has learned.

And after boasting about his unforgettable memory of the period…

“I actually got lucky because I had a very high draft number. I’ll never forget, that was an amazing period of time in my life.”

He went on to recall, “I was going to the Wharton School of Finance, and I was watching as they did the draft numbers and I got a very, very high number and those numbers never got up to.” The word “deferment” was not mentioned by Trump during his chat with the morning show hosts on WNYW, the Fox affiliate in New York City.

In fact, the December 1969 draft lottery occurred about 18 months after Trump graduated from the University of Pennsylvania, where he studied business at the Wharton School.

The story of Trump’s numerous deferments is interesting, particularly since he has, apparently, forgotten about them entirely when pressed on his lack of military service. It is his final deferment, disqualification after a medical examination, that caught my attention:

October 15, his classification was switched to 1-Y, which was given to men deemed qualified for military service “only in time of national emergency.”

The 1-Y classification came a month after Trump underwent an “Armed Forces Physical Examination,” according to Selective Service records, which note the results of the exam as “DISQ.”

Here is the extract of Trump’s Selective Classification record provided to The Smoking Gun following their TSG records request (click for larger image): 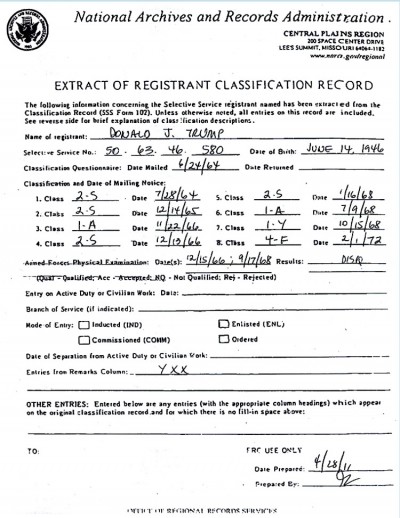 What caught my attention was the line labeled “Entries from Remarks Column” that says, simply, “YXX”.

Among other things, the syndrome increases ones risk of attention deficient hyperactivity disorder, autoimmune disorders, depression, and learning disabilities (including dyslexia).

So, while I cannot be certain the “YXX” note really means Trump was disqualified because he suffers a chromosomal disorder, it would explain the medical disqualification. And his lousy memory!

And the only way to know for sure is for Trump to—you got it—release his medical records. Otherwise, we will never know whether the Republican’s latest star candidate has a chromosomal disease….