The Cook Political report has released a new batch of ratings for competitive House races.

The two Washington state races that make the list are WA-1, the seat being vacated by Rep. Jay Inslee for his gubernatorial run, and the new WA-10. (Here is a map of the new Washington state Congressional districts.)

WA-10 is rated Safe Democratic, and Cook’s Partisan Voter Index (PVI) for the district is D+5.

These ratings have been stable for awhile.

Update: Here is a graph of the count of lean/toss-up seats since the beginning of the year: 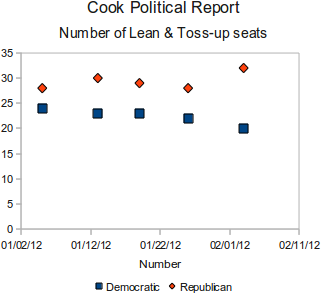 The trend in this graph lends credibility to suggestions that Democrats may win back the House in 2012….