After reading the rules, reviewing the documents and analyzing the data, I am now prepared to categorically state that Sen. John McCain most certainly did not win the Washington state Republican caucus… because there was no Republican caucus, at least not as most people understand the term. 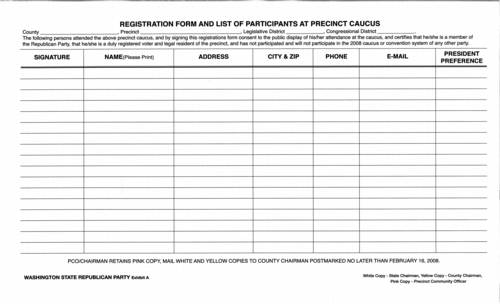 Unlike the Democratic caucus there is no counting and reporting of presidential preference, and no allocation of delegates proportionate to the stated preference of the attendees. There is no time alloted in the agenda for caucus goers to speak on behalf of the presidential candidates, and no opportunity to go back and change one’s preference. After selecting a secretary (and a chairman if no PCO is present) the attendees proceed to nominate and elect delegates and alternates. Nominees are given “a reasonable period of time” to speak on their own behalf, and are required to indicate presidential preference, but there is no requirement that the indicated preference is the same as that stated on the registration form.

Afterwards the caucus officers are required to submit back to the county party a Caucus Report that includes the names and addresses of the elected delegates and alternates, but note that the official form provides no line for reporting the presidential preference of the delegates. 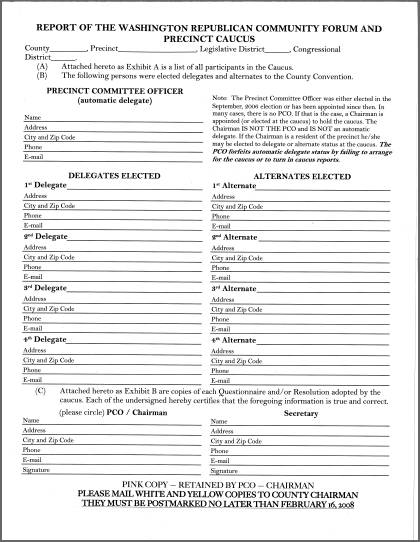 So, on Saturday night, when WSRP Chair Luke Esser disrupted the emerging media narrative of a potential three-state Huckabee sweep, by officially congratulating McCain for “a hard-fought win,” what is it exactly that McCain supposedly won? The delegate count? Hardly, for not only are the delegates not bound to a specific candidate, they weren’t even elected based on presidential preference. (If they were, you’d think they might have included a line for that on the form.) Furthermore, because the state party rules permit county organizations to allocate any number of delegates, as long as they are at least twice the number of precincts, and uniformly apportioned within the county, a precinct delegate from one county might represent a vastly different number of voters (or caucus goers) than a precinct delegate from another, and thus might play a vastly greater or smaller role in ultimately selecting a delegate to the national convention. A statewide precinct delegate count would therefore be an entirely meaningless metric of presidential preference, even assuming it represents presidential preference at all. Which it doesn’t.

To declare McCain the winner of the WA GOP caucus — as Esser has repeatedly done over the past several days — is to imply that he won the most votes, or would ultimately win the most state delegates based on the precinct caucus results, but the raw precinct delegate count as reported by the WSRP directly corresponds to neither. Esser could have reported the results of the straw poll, which would at least have reflected the preference of the caucus attendees. Instead he chose to mislead the media and the public by presenting delegate totals as something they are not.

And in fact, even if precinct delegates were comparable from county to county (and they’re not) and do represent a binding presidential preference (and they don’t,) the results released by the WSRP and a smattering of county organizations would strongly suggest that both Huckabee and Paul would earn more national delegates from the caucus process than the putative winner. McCain won big in King County, but apparently lost almost everywhere else in the state. That would give McCain national delegates from maybe two congressional districts while Huckabee and Paul split the remaining seven.

Of course, I don’t need to explain any of this to Boss Esser — he understood the process better than anybody, and knew that if the precinct delegate totals weren’t totally meaningless they at best predicted the opposite of his Saturday night pronouncement. But the Huckabee “sweep” narrative had to be crushed, and Esser was more than willing to do it. Huckabee’s lawyers can recount all they want; the damage has already been done.