Has the agonizing, prolonged battle between Sen. Hillary Clinton and Sen. Barack Obama helped or harmed the Democratic brand name? This has become a hot topic of debate at dinner tables, in bars, and in car pool across the nation. But mostly the debate has been fueled by a seemingly endless parade of political pundits.

One side—the pessimists—argue that irreparable harm has been caused by elevated rancor and even the use of Rovian tactics by the campaigns. The other side—the optimists—argue that the media attention, fanaticism, and fevered pace of campaigning ultimately benefits the Democrats.

I fall in the optimist camp, but I am always more comfortable having empirical verification of my opinion. And empirical evidence there is.

Every month, Rasmussen Reports releases a new partisan trends report based on monthly interviews of a huge number of people:

…the Democrats now have the largest partisan advantage over the Republicans since Rasmussen Reports began tracking this data on a monthly basis nearly six years ago.

During the month of April, 41.4% of Americans considered themselves to be Democrats. Just 31.4% said they were Republicans and 27.2% were not affiliated with either major party.

April was the third straight month that the number of Democrats topped 41%. Prior to February of this year, neither party had ever reached the 39% level of support.
[…]

Here is a graph showing how the trend in party affiliation has changed over time for the U.S.: 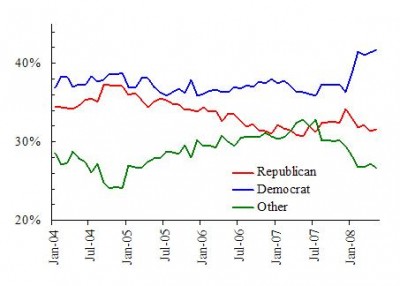 Republicans reached their peak numbers of 37.3% in September of 2004, and have been on a slow decline since.

Until about six months ago, the Democrats were holding steady at about 37% Democratic voter identity. The rise since December has been nothing short of stunning. Democrats had 36.3% identity in December and shot up to 41.5% in February—just about the time that the race started heating up.

The data don’t tell us what this increase is all about. (Although…the correlations among the groups suggest that a shift from “Other” identity to Democratic identity explains about 2/3 of the recent variation). No doubt non-primary things like ongoing Republican scandals, a tanking economy, a dragged-out occupation of Iraq, soaring fuel prices, and the fact that George Bush and Dick Cheney call themselves Republicans have helped swell the ranks of Democrats.

A cautious statement would be that any damage done by the primary contest is minor at worst, as the damage has been more than offset by the Republican collapse, resulting in a net gain for Democrats.

An alternative explanation is that the primary-from-hell really has been a good thing for Democrats.