The full numbers from Wednesday’s counts were released this morning by the Secretary of State’s (SoS) office. They’ve driven another nail in the coffin of R-71. 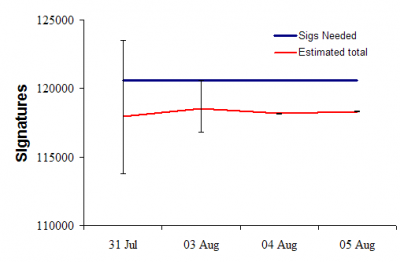 These estimates are conservative because I am assuming all “missing” signatures will be treated as valid. (I’ve changed my methods a bit since yesterday—a journey through the methodological details begins below the fold).

The important things to notice here are:

The trends, so far, indicate that, short of a miracle, this measure will not qualify for the ballot.

At this point, I am going to totally geek-out and discuss methodological stuff. If you’re interested, venture below the fold.

There are three methodological issues in trying to predict the total number of valid signatures based on a smaller sample of signatures.

The first is estimating the total number of duplicates, the second involves actually estimating the number of valid signatures, and the third is finding the sampling error (i.e. the uncertainty that arises because we only sampled some of the signatures).

The estimate is unbiased under the assumptions stated above.

The estimate of total duplicates could be thrown off if many people sign more than twice. But as of yesterday, nobody had done so.

(This estimator, and others that make different signature processing assumptions, are found in MM Whiteside and ME Eakin (2008) The American Statistician 62(1):17-21.)

Using this estimator with the numbers from yesterday’s count, we estimate 117,807 valid signatures.

I wrote this post yesterday, while sitting around waiting for a data dump . It didn’t come yesterday evening, but it gave me time to derive a hitherto unknown estimator for the number of valid signatures based on a more realistic processing scenario. The scenario is that the SoS office first checks to see if a person is in the voter rolls, then checks to see if that person has already been recorded as signing the petition, and finally checks the signature against the signature on file.

For a petition of N signatures, with a sample of size n, a total of r signatures from people not on the voter rolls, d duplicates, and m signature mismatches, we get this estimator for the total number of valid signatures:

So using yesterday’s totals, the equation gives us an estimated 118,330 valid signatures (assuming the “missing” signatures are all valid). So just by making more realistic assumptions about the processing sequence, the estimated number of valid signatures has increased by about 500. Still, the measure falls well short of the 120,577 needed to make the ballot.

I’ve not found an explicit formula for the standard error of V (and haven’t derived it for V2). An approximation can be found using simulations. Here is a brief description. For each data dump, I simulated 10,000 petitions being sampled at the observed sample size. For each, I draw a random number of invalid signatures, based on observed invalid signature count, and I draw a random number of duplicates, based on the observed duplicate count and the remaining valid signatures in the sample. [Super geeky technical details: I draw a number of invalid signatures, b’, from a beta-binomial distribution with parameters b and (n – b). Then, I draw a number of duplicates, d’, from a beta binomial distribution with parameters d and (n – b’ – d)]. An estimate of V is then found from the equation above. The average of the 10,000 Vs is the expected number of signatures (V*), and the standard deviation of the Vs is an approximate standard error for V*. In fact, I used the upper and lower 2.5% quantiles of the 10,000 Vs as a 95% confidence interval for V*.

Extensions to V2 are straight-forward. Now we require three draws from a beta binomial distribution because we have broken invalid signatures into three categories (non-registered, duplicates, signature mismatches) to account for processing order.

Last Friday, R-71 had a bit of a chance. The expected number of valid signatures fell short of the threshold, but that could have been bad luck in the sampling. Now, with a larger sample examined, the shortfall is definitely not a function of chance.