Fresh on the heels of the Survey USA poll I wrote about this morning, Rasmussen Reports has just released their head-to-head poll pitting Washington state Gov. Christine Gregoire against her Republican challenger, Dino Rossi.

The Rasmussen poll surveyed 500 likely voters on June 9th. Gregoire led Rossi 50% to 43%, with another 2% selecting “other” and 5% who are not sure. The +7% advantage that Gregoire has in this poll is about double that of the SurveyUSA poll (which was taken from the 7th to the 9th of June).

Gregoire won 949,070 times and Rossi won 2,829 times. In other words, the poll results suggest that, for an election held now, Gregoire would have a 95.2% probability of winning the election and Rossi would win with a 4.8% probability. 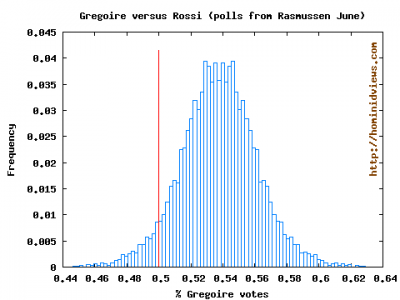 Since the Rasmussen and SurveyUSA polls were taken almost simultaneously using similar methods, it seems quite reasonable to combine the polls. Of the 1,137 pooled poll participants, 571 (or 50.2%) of them “voted” for Gregoire, 514 (or 215%) “voted” for Rossi and 52 (or 4.6%) choose neither. A million simulated gubernatorial elections later, Gregoire wins 952,104 times and Rossi wins 44,749 times. The pooled set of polls suggest that, if an election were held now, Gregoire would have a 95.5% probability of winning and Rossi would have a 4.5% probability of winning.

You may be wondering why Gregoire’s probability of winning actually increase when the Rasmussen poll is pooled with the SurveyUSA poll. The answer is that Gregoire percent of the vote actually decreases slightly in the pooled analysis. In the Rasmussen poll she led by 50%/(50% + 43%) = 53.8%. In the combined poll, she leads by 50.2%/(50.2% + 45.2%) = 52.6%. But even with a smaller estimated fraction of the vote, there is more certainty that her lead is real (95.2% for the Rasmussen versus 95.5% for the pooled polls). This is because the certainty is more strongly affected by the larger sample size in the pooled polls.

Here is the distribution of outcomes from the simulated elections (combined polls): 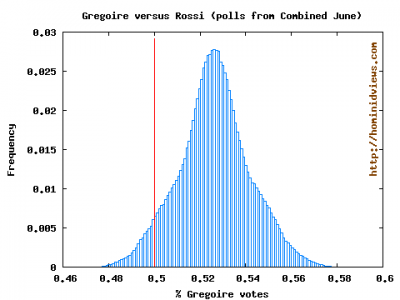 As I suggested previously, it is unlikely that Gregoire’s lead is an artifact of sampling error. Now, with seven consecutive polls in a row in which Gregoire leads Rossi, it is even more certain that she is truly in the lead.