This analysis examines the relative strength of Obama and Romney over the past nine months, using all available state head-to-head polls (something over 200 of them).

There haven’t been any new state head-to-head polls released in this race since just before Christmas. The pollsters went on vacation, and have since turned their attention to primary polls.

I’ve used the week since the previous analysis to hunt down older polls for this race going back to late 2010. I’ve also double checked the numbers from my first flurry of entering poll data into the computer and found two errors: I flipped the Obama and Romney numbers in a PA poll (which now causes the state to look a little bluer), and I fixed an incorrect sample size in a Georga poll. Among the newly-discovered (but older) polls, I’ve found the only poll from ND and a TN poll that is more recent than any other.

Here is the basic analysis using all state polls taken within the past month or, failing that, the most recent poll: 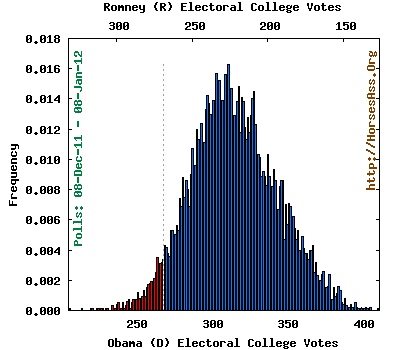 The long term trends in this race can be seen from a series of elections simulated for every week for the past nine months (08 Apr 2011 to 08 Jan 2012). Each week polls are used from the preceding 1 month (or, failing that, the single most recent poll—FAQ). 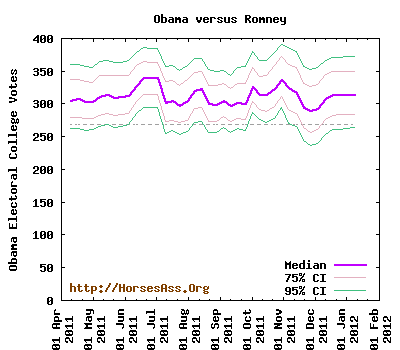 Over the past nine months, Obama has maintained a clear advantage over Romney. Aside from a brief spell in late November, Obama’s probability of winning has remained above 75% and typically higher. There does not appear to be any clear trend over time—pretty much steady state.

(You can see the maps and electoral vote distributions animated here.)

Back to the current time period, here are the ten most probable electoral vote outcomes for Obama:

The most recent analysis in this match-ups can be found here.