About four years ago, I examined how party identity had changed in both the U.S. and Washington state over a two year period following the mid-term elections. Writing about Washington state in 2007, I pointed out:

A graph showing party identity over time, based on SurveyUSA polling data, showed some clear patterns: 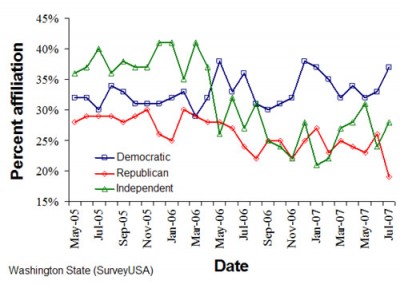 Democratic identity had increased slightly from the low thirties to about 35%.

Since mid-2007, we’ve had economic calamity, the Obama revolution, followed by a Tea Party revolt, and the Occupy movement in response. Unfortunately, SurveyUSA has only published data through August of this year, so we cannot look at changes brought on by the three month old Occupy movement. What we can do is look at a time period similar to my four year old analysis.

What do we see? 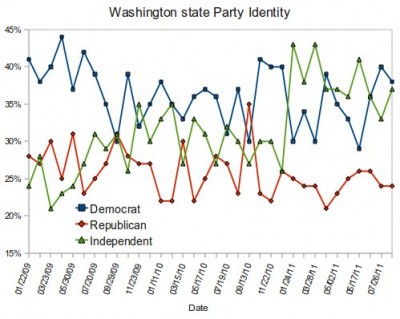 In fact, Democratic identity is about where it was four years earlier, in July, 2007.

Republicans show a decline over the same period, from the high-20s just after the inauguration, followed by a gradual (if variable) decline to about 25% by July. Really, the Republican numbers are very similar to July of 2007.

Independent identity has increased from the mid-20% to the high-30%. One reason for this is an increase in the number of people who picked an identity as a “D”, “R”, or “I”, instead of an “other” category or a no-response.

What does all this mean? Maybe nothing. But it is interesting that we ended the summer in about the same place we were four years ago. There have been no real gains for Democrats or Republicans.

The one big difference we see is that more people chose to identify as independent instead instead of some other category. This might seem important for the many open statewide elections we have in 2012. A lot will probably be made about it. But I don’t think its all that important.

Here is what I think is happening: the increase in “D”, “R”, or “I” identity is an artifact of the top-two primary that was implemented in 2008. It simply reflects a decline in third-party identity. After a couple elections in which third-parties rarely make it to the general election (except, of course, presidential elections) people are less inclined to identify their party as, say, Libertarian, Green, or Reform.

If correct, this hypothesis suggests that the increase in Independent identity isn’t some sort of grand political movement…rather it’s a natural outcome of the top-two primary.