That series of four-page mailings many of you have been getting from the Washington State Republican Party, attacking Gov. Chris Gregoire and urging you to “vote for Dino Rossi”…?  Not only are the mailings deliberately misleading and factual incorrect, but according to a complaint filed today with Public Disclosure Commission, they are also a blatant and massive violation of campaign finance laws prohibiting the use of soft money for direct advocacy.  In other words… Dino Rossi and the Republicans are cheating.

And having obtained a PDF of the complaint from Seattle attorney Kyle Olive, I’ve gotta say that the charges within are pretty cut and dry.  The WSRP most definitely spent $150,000 of “exempt” funds on a last minute, “non-exempt” smear campaign, and they barely even tried to hide it.

The Washington State Republican Party (“WSRP”) has recently sent out several large mailings containing direct advocacy on behalf of its gubernatorial candidate, Dino Rossi.  The advertisements not only directly attack Governor Christine Gregoire, but explicitly ask voters to “vote for Dino Rossi.”  It appears from WSRP filings with this agency that these mailings were paid for with “exempt funds,” in plain violation of RCW 42.17.640.

So what does all this mean, and what makes the violation so clear cut?  Well, as Olive explains in his complaint, our campaign contribution and expenditure limitations were imposed via initiative in 1992, with the stated goal of ensuring equal opportunity “to influence the elective and governmental processes,” and to restore “public trust in governmental institutions and the electoral process.”  These rules thus limit the ability of a single wealthy individual—say, McCaw Cellular co-founder Rufus Lumry—from personally bankrolling a candidate’s campaign.

There are exemptions though, for certain party-building and get out the vote activities, as specified in RCW 42.17.640 (the emphasis is mine):

(15) The following contributions are exempt from the contribution limits of this section:

(a) An expenditure or contribution earmarked for voter registration, for absentee ballot information, for precinct caucuses, for get-out-the-vote campaigns, for precinct judges or inspectors, for sample ballots, or for ballot counting, all without promotion of or political advertising for individual candidates; or

(b) An expenditure by a political committee for its own internal organization or fund raising without direct association with individual candidates.

Exempt contributions to parties fall outside the normal contribution limits and must be deposited in a separate “exempt” bank account from which only “exempt” expenditures can be made.  And the statute is pretty damn clear that “exempt activities” may be paid for with exempt funds only if they are done “without promotion of or political advertising for individual candidates,” and “without direct association with individual candidates.”

And if that’s not clear enough the PDC spells out in its rules (WAC 390-17-60) that promoting or advertising “one or more clearly identified candidates do not qualify as exempt activities”, while definitively stating that…

Well, you can’t get any more unambiguous than this, an image that appears in one form or another in each of the three illegal mailings on which the WSRP spent $150,311.10 of exempt funds: 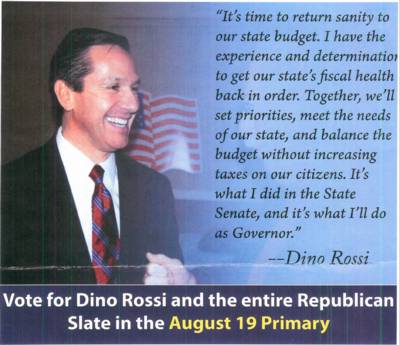 Oh… and most of the rest of the content of these illegal mailings are devoted to trashing Gov. Gregoire by name and by likeness (and by lies), an activity that on its own disqualifies the use of exempt funds:

For purposes of RCW 42.17.640 and this section, activities that oppose one or more clearly identified candidates are presumed to promote the opponent(s) of the candidate(s) opposed.

This isn’t rocket science.  It’s Campaign Finance 101.  All the political candidates, consultants, committees and parties know damn well what is or is not allowed.  And yet the WSRP chose to blatantly violate campaign expenditure laws that have been in place for the past 16 years.

Why? Because there are no limits on exempt contributions, and given the Republican Party’s tarnished brand, that’s about the only sort of money they seem to be able to raise these days:  large, lump sum contributions from wealthy individuals like Rufus Lumry ($80,000) and Eastside developer Skip Rowley ($30,000), and from powerful special interests like the National Electrical Contractors Association ($50,000) and Walmart ($25,000). If they could have raised non-exempt money I suppose the would have, but they can’t, and the WSRP’s non-exempt committee is now virtually bankrupt.  So instead they illegally used these lump sum “exempt” contributions, on their benefactors’ behalf, to directly influence the gubernatorial race… exactly what Initiative 134 was intended to prevent.

Meanwhile, Dino Rossi and the WSRP continue to make hay about tribal contributions to the state Dems’ exempt committee, monies which, as far as I can tell, have only been used for exempt purposes.  Perhaps the reason why the R’s seem so suspicious of the D’s use of these exempt funds, is that the R’s misuse these funds themselves?

In psychology, that’s called “projection,” but in politics we just call it “cheating.”

Let’s be clear, this is no mistake or accidental oversight; WSRP chair Luke Esser, allegedly a lawyer, deliberately and knowingly violated the law, feebly attempting to disguise these illegal expenditures by mislabeling them as “member communications” (a label that would not make these expenditures exempt, even if true.)  The WSRP could have run the mailing past the PDC ahead of time—campaigns do this all the time—but they knew the answer they would get.  Which of course is why they never asked.

No doubt the WSRP fully understands that it faces a substantial penalty for such a flagrant and deliberate PDC violation, but that won’t come until after the election, so no harm done.  No, if there’s a penalty to be paid ahead of this election it will have to come at the hands of the local media, but whether they’ll give this story the scrutiny it deserves, or merely brush it off as another “he said, she said” between two feuding camps, remains to be seen.