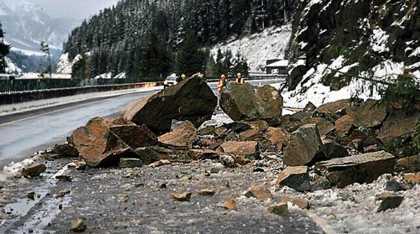 Act of God, or act of WSDOT?

Conservative airwaves are growing heavy with fear, as I-912 supporters, less and less sure about their once sure thing, apparently crack under the pressure of a close election. On Friday, the aluminum hat brigade was calling into KVI with complaints that transportation officials were greasing the skids for the anti-roads initiative’s defeat… accusing officials of intentionally knocking traffic lights out of sync to create more congestion, and of putting make-busy road crews back on projects that were finished weeks earlier.

But by Monday morning the conspiracy theorists were out in full force, with Kirby Wilbur actually entertaining the suspicions of callers who claimed that WS DOT had intentionally caused the rock slide that has shut down I-90 near Snoqualmie Pass since early Sunday morning… all as part of a secret campaign to defeat I-912.

Apparently state Secretary of Transportation Doug MacDonald was out there crawling around the slope at 3 AM, planting sticks of dynamite or something. Or perhaps he’s omnipotent. I dunno, but it does seem kind of funny that the same agency that’s supposedly too incompetent to spend our transportation dollars is somehow able to knock the side of a mountain onto a roadway at a moment’s notice.

WSDOT says it might manage to open a lane in each direction as early as tonight, but personally, I hope they take their time until after Tuesday’s election. For as far as I’m concerned, if I-912 passes, why should my tax dollars be used to pay for Kittitas County’s problem?