As reported by KXLY yesterday, the party responsible for those mysterious “Dino Rossi, Don’t Let Seattle Steal This Election” signs is none other than (surprise) the BIAW! The Orca-killing association hopes to divide the state by putting up 61 billboards throughout Eastern Washington at a total cost of $168,000.

Jill Strait, a spokesperson for Rossi’s campaign, said this is the first time they’ve heard about the billboards…

… you know, except for three weeks ago, when she spoke to Postman about the signs. But other than that, this is absolutely the first time she’s ever heard anything about it. Really. You can trust her on this.

As for the signs themselves, they’re not proving universally popular with Eastern Washington residents, as evidenced by the rather emphatic graffiti gracing this sign in Winthrop: 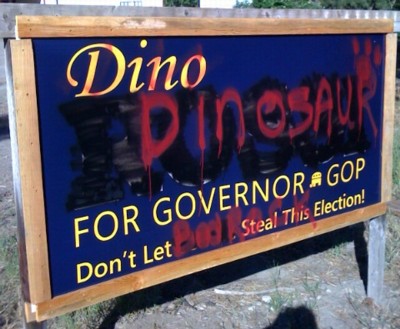