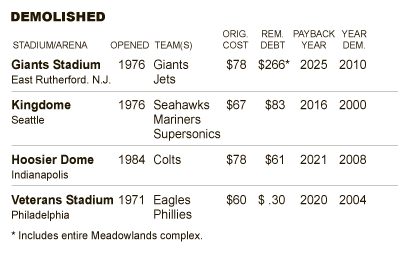 The $83 million local taxpayers still owe on the Kingdome, ten years after it was demolished, gets a mention in today’s New York Times article on the extraordinary bad deal publicly financed stadiums turn out to be, but that’s nothing compared to the most Giant boondoggle of them all:

It’s the gift that keeps on taking. The old Giants Stadium, demolished to make way for New Meadowlands Stadium, still carries about $110 million in debt, or nearly $13 for every New Jersey resident, even though it is now a parking lot.

And that’s just the debt on Giants Stadium alone. Three and a half decades after workers first broke ground, New Jersey taxpayers still owe $266 million on the entire Meadowlands project.

So I guess we got off relatively easy with the Kingdome. How many years we taxpayers will be paying off the bonds on Safeco and Qwest fields after they’ve been abandoned or demolished, now that’s another question. And what more useful or productive purposes we might have put that money to, rather than padding the pockets of billionaires, well, we can only speculate at this time when city, county and state governments are facing unprecedented deficits.

As the NY Times article concludes:

With more than four decades of evidence to back them up, economists almost uniformly agree that publicly financed stadiums rarely pay for themselves. The notable successes like Camden Yards in Baltimore often involve dedicated taxes or large infusions of private money. Even then, using one tax to finance a stadium can often steer spending away from other, perhaps worthier, projects.

“Stadiums are sold as enormous draws for events, but the economics are clear that they aren’t helping,” said Andrew Moylan, the director of government affairs at the National Taxpayers Union. “It’s another way to add insult to injury for taxpayers.”

An interesting side note, the new $1.6 billion dollar Meadowlands Stadium both the Jets and the Giants will inaugurate this fall, was built entirely with private money, so it can be done. By comparison, taxpayers picked up the cost for 71% of Paul Allen’s Qwest Field. Go figure.