First of all, if Christopher wants to interview people who are truly struggling to scrape by on their meager income, he might want to start by interviewing his own staff. Second, I’m not sure I get the whole point of featuring failing businesses as the poster children of the anti-$15/hour side of the debate? I  mean, what’s the argument? If we raise the minimum wage, the unprofitable bookstores and coffee shops Christopher loves will fail even sooner? That’s hardly a sound premise on which to base economic policy.

Don’t get me wrong, I have great empathy for small business owners. I come from a family of small retailers, and I owned and operated a small business myself. My then-wife and I founded Eccentric Software in 1993, initially to publish what I loving describe as “the world’s most widely pirated rhyming dictionary software,” capitalizing our business on credit cards and some small loans from family members. Over the next five years we sold tens of thousands of copies of four different titles in shrink-wrapped retail packaging through major outlets like Computer City, CompUSA, Egghead, and in all the major mail-order software catalogs. Our software (much of which I developed myself) garnered great reviews and developed a loyal following, generating hundreds of thousands of dollars in revenue. To this day I’m proud to say that I am one of the few Americans who can boast a trade surplus with Japan. 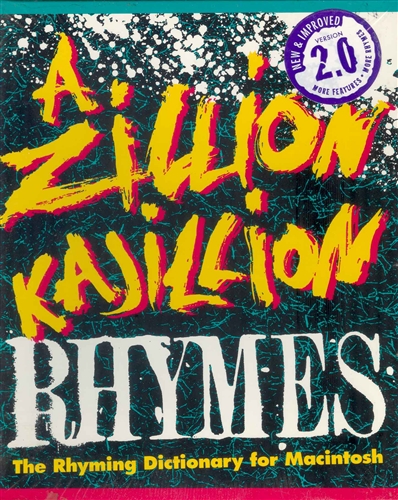 The original retail packaging for A Zillion Kajillion Rhymes.

But while the business never lost money, it never really made much money either. It was an awful industry, one in which the people who create the most value reap the least rewards, and in which longtime vendors would sometimes just decide to refuse to pay you, simply because they could. We lived comfortably, but we eventually walked away with a six figure debt.

Still, nobody shed tears for us, because such are the risks of entrepreneurialism. We knew that going in. But we took that risk anyway, partly because of the prospect of reward, and partly because we just passionately believed in our product. I can point you to dozens of Broadway musicals and Disney movies and hit songs that I know were written using our software. That’s gratifying in itself. And the money thing worked itself out too, with my then wife’s entrepreneurial experience helping her land a dot.com job that ultimately paid off our remaining debt. (I also landed good-paying dot.com work, but my options never paid off.)

So yeah, I know what it’s like to run a struggling small business. I know what it’s like to pour all my passion and time and financial resources into a business, for little monetary return. Hell, even HA was an entrepreneurial endeavor into which I sunk immense human capital, often for non-monetary return. So I feel for small business owners, and do agree that the system, alas, is stacked against them.

That said, most businesses fail. They just do. I’m sorry that Rafael Sanchez might have to go back to an unsatisfying job at Microsoft or some other bland corporation now that his lovely little business didn’t work out (I’ve been to Cintli, and it truly was a lovely little place). I feel your pain, Rafael. Been there, done that.

But life isn’t fair. So while no doubt a $15 minimum wage might push some struggling small businesses over the edge, others will take their place. Broadway won’t become an empty landscape of boarded up storefronts, bereft of coffee shops, restaurants, and retailers. The business community will adapt to Seattle’s living wage economy. That’s the way capitalism works. And there’s no rule that says the forces of creative destruction may only be unleashed by the private sector.