That is, assuming Washington gets a chance to cast its votes, which given past history, I can’t imagine we’ll get to the W’s… especially after Arkansas voted unanimously for Obama.  (Well, technically, WA already did cast its votes, 68-26 with 4 absent, but they probably won’t get the chance to announce it.  That’s kinda the point.)

Not much of a floor fight, is it?

UPDATE:
FYI, Clinton released her delegates this morning, so the cynical amongst you will say that the fix is in.  Or, you know, it might be described as a display of Democratic unity.  But that’s not a very compelling story, is it?  So lets just stick with the former. 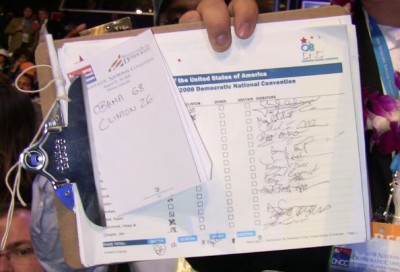