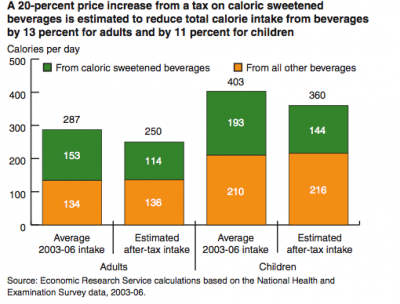 Why are Coke, Pepsi and the rest of the beverage industry spending millions of dollars to repeal Washington’s temporary tw0-cent per 12-ounce serving excise tax on carbonated beverages? Because, as this new USDA study confirms, raising taxes on sugary beverages does indeed decrease consumption.

Soda taxes are being pushed in states and cities nationwide, partially as revenue generators, and partially as public health measures, for as this USDA study also demonstrates, decreasing consumption of sugary beverages also decreases overall caloric consumption, leading to a substantial drop in obesity rates and its associated costs.

It’s basic economics really. Raise the cost of something nonessential, and consumers will purchase less of it.

Of course our two-cent per 12-ounce tax was mostly sold as a revenue measure, and only comes to more like an average 7 percent price increase, so we won’t see the same degree of public health benefit as that shown in the USDA study, but the I-1107 sponsors can’t have it both ways. They can’t oppose the initiative because it would decrease consumption of their product while at the same time dismissing the public health benefits of reduced consumption.

Make the nanny state argument if you like, but we regularly use our tax code to influence behavior (you know, like cutting taxes on the wealthy to spur investment). And with both our state and our nation is in the midst of an obesity epidemic, I can think of worse ways to fill our gaping budget hole than a tax on soda-pop.