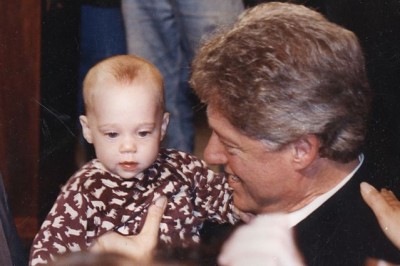 Seven months ago, the last time my 92-year-old grandmother had dinner at my house before she died, I organized all of the women in my family for a photo of “Four generations of women for Hillary Clinton.” In the photo we included the baby tee shirt that my now 15-year-old had worn when “we” volunteered for Bill Clinton’s first presidential run and our prized autographed photo of my infant daughter being held by President Clinton. Hillary was to be our first woman president, and my now adolescent daughters and I agreed with their cousins and aunts and grandmothers and great-grandmother that it was finally time.

Over the last few weeks in Pennsylvania my ambivalence about who I would vote for in the primary has been met by uniform surprise, “but you…. I thought you…aren’t you.” Yes, I am an upper middle class educated professional woman registered Democrat. My first political memory is going door to door for George McGovern with my mother. I have proudly self-identified as a feminist since age 12, and I have never wavered in my support for both Clintons. But, despite her intelligence and her eloquence, Hillary isn’t the candidate I wanted her to be, and if she can’t convince me, how can she possibly win a general election.

I don’t actually fault Hillary, because as all successful feminists of her generation who struggled to break the glass ceiling—and isn’t this the ultimate glass ceiling—she has absolutely mastered the rules of a man’s world. Unfortunately, the game is changing, and the old rules are no longer good enough. I wanted the first woman president to be better than the men who preceded her and not simply to be better at their politics. I wanted Hillary to rise above the fray, to inspire and to unite, and to humanize, and to finally be the one to change both how we campaigned and how we governed. While I owe Hillary a great debt for paving the way for the next generation of women politicians, I believe that our first woman president will not come from her generation. The price she and her peers had to pay for playing by the rules, as they existed, was too high. The first generation feminists didn’t realize that woman shouldn’t simply strive to succeed at the old rules, but they needed to change the rules themselves.

Barack Obama’s speech on race in Philadelphia was probably my turning point. Although young and relatively inexperienced, Senator Obama is behaving like the elder statesman that I wanted Hillary to be. He strives to unite, to inspire and shockingly for a politician, he tells the complicated truth about issues like race, that other politicians avoid. I am immensely grateful to the Clintons for their years of service for the causes I believe in, and I hope that Senator Clinton and former President Clinton continue to use their stage to change the world. I wish the Clintons well and like many of their friends and allies I hope they don’t think I am betraying them, but I am voting for Barack Obama in the Pennsylvania primary.