Steve Lacey was on his way to Costco on Sunday afternoon, July 24, and was sitting in traffic, waiting for a light to change when his life ended. A minute before he was tragically killed, a 52-year old driver, Patrick Rexroat, was allegedly speeding southbound on I-405, carrying three and a half times the legal limit of alcohol in his bloodstream, and chasing a car that he thought had cut him off in traffic. While in hot and drunk pursuit of the other driver, Rexroat failed to negotiate the turn he attempted at high speed and slammed into the driver’s side door of Steve Lacey’s car, killing him instantly.

Witnesses report that the 52-year old Rexroat got out of his car and pounded his chest in a defiant gesture. When he was told that he had killed another person he shrugged his shoulders and started to walk away.

What sort of justice awaits the victim’s family, the community and the defendant in this case? The answer is as infuriating as the crime. Under Washington State sentencing guidelines, the killer of Steve Lacey faces no more than 41 months in prison, minus one-third of the sentence that will almost certainly be reduced for good behavior. That means that vehicular homicide offenders actually are removed from our streets for less than 2 and half years.

Want to be even more infuriated? Compare that to this:

The owners of two medical marijuana dispensaries in Spokane have been indicted by a federal grand jury.

Wright and Vivian face [up to 20 years] if found guilty of maintaining a drug-involved premise near a school. THC Pharmacy was located at 1108 S. Perry St. – which is less than 1,000 feet from Grant Elementary School.

As with anyone, I’m in favor of having zoning laws that keep dispensaries away from schools, but just to provide clarification on the seriousness of that offense, here’s a map of the neighborhood: 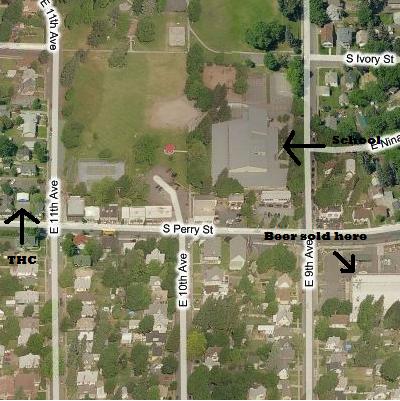 Of the five Spokane defendants, Wright is the only one I’ve communicated with so far. He sent me a rather desperate email yesterday about his situation. He’s in the process of selling all his possessions in order to defend himself (his dispensary was only open for a very short period of time and it never actually made any money). Unlike the caricature that law enforcement likes to present, these folks weren’t high rollers raking in the dough. They’re generally patients themselves who had the resources and entrepreneurial drive to provide for the growing numbers of authorized medical marijuana patients in the Spokane area who couldn’t provide for themselves.

Comparing that to the circumstances and likely sentence of the man who murdered Steve Lacey is enough to make one ill. Long after Patrick Rexroat has served his time and is once again a free man, Charles Wright will almost certainly remain behind bars, never seeing his two kids (who are now 10 and 12) grow up. You may not agree with Wright’s choices, or his defiance after being told to close up shop, but you lack a soul if you find any of this to be acceptable for a civilized society. And that comment is directed most pointedly at Eastern Washington U.S. Attorney Michael Ormsby and his office.

Next Tuesday, August 9, 1:30pm at the federal courthouse in Spokane is Wright arraignment. There are some preliminary plans for protests both here in Seattle and in Spokane. If anyone would like to participate, please feel free to email myself or contact the CDC.