Via the General, a message from Tom Wales’ brother-in-law:

Anonymity is a fine thing. Many an evening I have rafted down the Internets Tubes, safe and secure in my anonymity: unafraid to speak up and unafraid of consequences. Toes have been stomped. Feathers ruffled (my tactfulness is not legendary). Well, mea culpa.

In testimony Thursday, James Comey, former #2 at the Department of Justice under Ashcroft, testified to the House Judiciary Committee (actually brought up first by Rep. Mel Watt (D-NC), while Watt was questioning him) that John McKay, one of the fired USA’s, got in hot water in 2005 for agitating with the bigwigs in DC for more resources in hunting the assassin of Tom Wales, an assistant DA in Seattle killed on October 11, 2001. 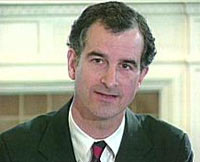 Tom was shot a half-dozen times in the neck and head with hollow-point bullets (aka “cop killers””) as he sat at his home computer, answering an email. Sitting as we do, now. He prosecuted white-collar crime in Washington State, and was also a visible and dedicated gun-control advocate. I watched him debate Wayne LaPierre once, on Good Morning America, and thought Tom ate Wayne’s lunch. He headed Washington Cease Fire until murdered with a handgun.

His slaying has never been solved.

The FBI has a team, permanently investigating…they’re on record as saying they know the killer. They released a letter to the press, purportedly from the suspect, and asked the public’s help in identifying him. The FBI has, they say, ruined the suspect’s life, and hassled many a gun owner.

Now I learn through these Internets Tubes that John McKay may have been fired for paying too much attention to the assassination of his fellow federal prosecutor, instead of filing bogus voter-fraud suits.

It appears the DOJ (who sent no reps to Tom’s memorial service, btw, even though he was the first active Federal DA to be murdered, and this just one month after 9/11) was directed to minimize the hunt for Tom’s killer because it would harm the Republican Party’s NRA base, and inflame gun-control advocates.

I don’t speak for the Wales family. Several of them still lose sleep when the case re-makes the news, fearful for the safety of Tom’s children, now grown. And I see their point, though the children are as brave as he.

But if the DOJ is now in the business of ignoring the murders of dedicated prosecutors who spent a career contributing to the community and standing up for the powerless to better win the next election, then it’s time to clean house. If I had been murdered, instead, and my case swept under the rug, Tom would have charged in like an angry wolf.

I married his sister, you see.

And so I ask you, gentle reader, to call or write your Congresspersons, especially if they sit on the Judiciary Committees; demand they ask each DOJ employee, parading through in this shameful affair, what they know or knew of reasons for McKay’s firing.

If this White House is willing to murder Justice for power, we should replace them. Now.

UPDATE:
Tom Wales’ brother-in-law has asked that I post the following correction and clarification:

Monday, I posted re: the unsolved Tom Wales case, and did so in anger. In allowing my anger and resurgent grief sway, I stupidly misstated details that upon reflection deserved more perfect accuracy. No matter the threats to it, or from whence they arise, justice and truth will win out; they must, eventually. I believe that, as Tom did and worked toward. The FBI, DOJ, and law enforcement are filled with public servants as dedicated to justice as Tom. I deeply regret putting my two cents in on a case already so difficult and emotional for so many of them.

To be more specific: the FBI is NOT on record as saying they have but one suspect; though it’s true they have one who is particularly a focus, and has been the subject of public appeals. Also, Mr. Comey only responded to Rep. Watt repeating earlier testimony, as noted in the link. I knew that, and simply erred.

My post showed insufficient respect to Mr. Comey, and to the FBI, and the rank and file at the DOJ, respect I continue to have. My deepest and heartfelt apology for any trouble or confusion I have caused.