It’s just been, you know, one of those days. So I’m stealing Carl’s schtick for a quick recap of all the political bullshit that’s accumulated over the past 24 hours.

Frank Reichert
Rep. Dave Reichert sure does like to be frank with his constituents. No wait… Reichert likes to frank his constituents, becoming perhaps the biggest drain on House Post Office resources since Dan Rostenkowski. Reichert recently mailed out his umpteenth piece of franked mail (ie, taxpayer funded campaign literature) since squeaking past Darcy Burner last November, and like all of them, this one includes a little survey so that he can pretend he’s actually carrying on a two-way conversation with voters. 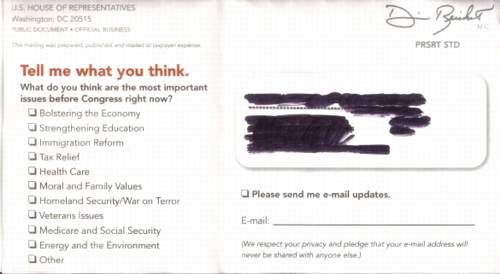 Murderabilia Roadshow
You know what else didn’t make the list? The “Murderabilia” bill… Reichert’s bold attempt to take the profit motive out of raping and strangling women by preventing serial killers from making money selling personal items. “I personally have seen the pain, the suffering of victims and their families,” said Reichert, who has built his political career on the myth that he caught the Green River Killer. “This industry is an exploitation of that pain and that suffering.” Um… by “this industry,” was he referring to murderabilia or politics?

Now if only Reichert’s bill also prevented incompetent sheriffs from profiting off bungled 18-year investigation, it would have my enthusiastic support.

Weapons of mass distraction
So what does it say about Dino Rossi’s prospects for 2008 if he had to resign from the Forward Washington Foundation so that he wouldn’t be a distraction to his own campaign? And what the fuck exactly is the meaning of the word “resignation” when it applies two weeks retroactively, but allows you to continue to receive your paycheck six more weeks into the future?

And could somebody please explain to me what Rossi means when he criticizes the media, saying:

“And they pound you into the ground with, you know, with what the future can be.”

Um… no… I don’t know. Perhaps Rossi’s “idea” man, Lou Guzzo can explain it to me?

Dino Rossi on the issues
Speaking of Rossi, if you really want to know what the man stands for, check out his new campaign website at www.dinorossi.com. Deep.

I’m not demonizing Dan Satterberg…
Because, you know, Dan seems to be a nice guy and all that. But it sure does seem to be a massive conflict of interest to have a guy serving on a Seattle Archdiocese panel dealing with sexual abuse allegations turn out to be the same guy in the prosecutor’s office who refused to subpoena church records… you know, subpoenas like those that were issued in dozens of other cities, and that turned up tons of evidence of church cover-ups. I’m just sayin’.