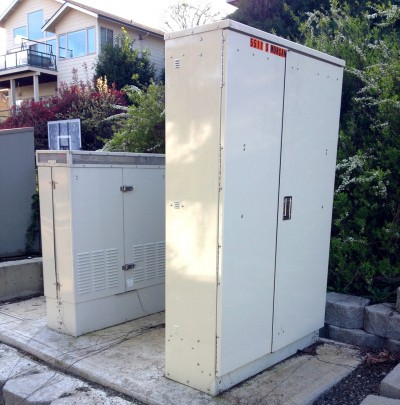 Refrigerator-sized utility cabinets like these may be coming to a planting strip near you if CenturyLink has its way.

As I wrote about a few months back on Slog, CenturyLink has long argued that its efforts to upgrade broadband speeds throughout the city have been hampered by regulations requiring neighboring homeowners to give their approval before installing refrigerator-sized utility boxes on city-owned sidewalks, planting strips, and alleys. These utility boxes—like the ones pictured above, just a couple blocks from my house—are unquestionably both an eyesore and a graffiti target. But CenturyLink says that 21,000 households would have access to faster broadband speeds today, had they the freedom to to liberally plop these down throughout the city.

Look at the utility cabinets above. Now picture them installed on the planting strip in front of your house. Now honestly ask yourself whether you and your neighbors should have zero say in how and where they are installed?

Some residents of Beacon Hill and other underserved neighborhoods had been asking for a pilot program that would have suspended these regulations in certain neighborhoods, just to see how things worked. But the mayor’s proposal would apparently eliminate these regulations altogether. And CenturyLink says it will take that as an opportunity install 349 cabinets in the first year alone.

That could provide welcome broadband upgrades to thousands of Seattleites. Which is good. But it would also create hundreds of new eyesores. (Of course, CenturyLink could alternatively install these cabinets underground or on utility poles, or pay homeowners to install them on private property, but that would cost more money, so no go.)

Personally, I support the notion of a pilot program. But completely eliminating the current restrictions without getting any binding promises back from CenturyLink just strikes me as regulatory giveaway and recipe for some very disgruntled homeowners.