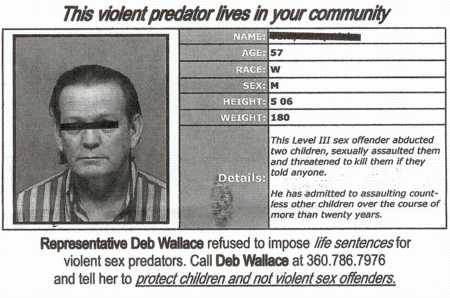 It is sick enough to exploit the victims of child sexual abuse for political gain, but to do so based on a lie is doubly unforgivable.

The conscienceless, grandstanding bastards at the state GOP have mailed out postcards like the one above in several districts across the state, targeting Democratic legislators. This is part of a well-funded, coordinated campaign from The Speaker’s Roundtable, that includes robo-calls and TV ads. And it is both offensively exploitive and incredibly dishonest.

As I previously reported, on the first day of session the Republicans set up a procedural motion to call for a vote on a 116-page legislative package that absolutely no one had read — not prosecutors, not police officers, not victim’s advocates, not the legislators themselves — knowing full well that the Democrats would reject such an irresponsible move.

But that’s what the GOP wanted; they had their mean-spirited advertising campaign in the can, just waiting for the Dems to give them an excuse to launch it.

If the Republicans really wanted to pass some legislation on this issue they would have sat down with the Democratic leadership — which supports much of their proposal in principle — and crafted a bipartisan package. But apparently, they couldn’t give a flying fuck about the victims of sexual predation beyond how they can cynically use them for political gain.

Yeah, politics is a tough game and all. But this is really disgusting.