Back in September, when two to three thousand people swarmed Westlake Park in support of health care reform — specifically, a greatly expanded federal government role in the health care market — the Seattle Times didn’t think the event merited even a mention in the following day’s paper. Nothing. Nada. Zilch.

Yet when maybe a couple hundred teabaggers show up to celebrate the anniversary of their faux movement, the Times apparently feels the need to devote a political reporter, a photographer and twenty column inches:

An anniversary “tea party” rally drew about 250 people to a rainy corner in Northgate on Saturday afternoon. Not bad for Seattle, or as one participant called it, “Lib-Ville.”

Really? This is news, and the ten-times-bigger pro-HCR/pro-government rally was not? You gotta be fucking kidding. 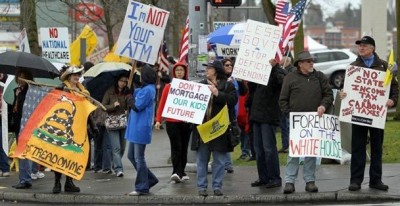 This is the type of shit that drives media critics like me absolutely nuts. It’s “false equivalency” taken to the Nth degree, with the Times not only covering the teabaggers totally out of proportion to their actual numbers, but entirely ignoring the much larger and more energized pro-reform movement on the other side. And more coherent as well, especially compared to the “keep government out of my Medicare” logic of your typical teabagger:

They oppose abortion because of their religious beliefs, and they attended their first tea-party event last year after paying their taxes, they said. But they’re perhaps most passionate about the tea-party movement’s common ground: the size of government.

“Government is too big and it’s too intrusive,” said Doug Larsen.

That’s right… government is too big and too intrusive… which is why they want it to tell women what they should or should not do with their bodies.

But, you know, the Blethens have been in the newspaper business for four generations, so if they tell me that this idiot babbling in the rain is newsworthy, while several thousand people rallying in support of health care reform is not, I suppose I’ll just have to bow to their superior journalistic expertise.