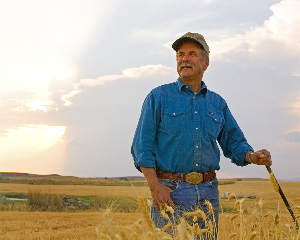 Peter Goldmark is running for Commissioner of Public Lands.

He’s a rancher, a farmer, a geneticist, and through much of his life has served the public. He served as agriculture commissioner under Gov. Mike Lowry, and on the Okanagon school board. He was a regent at Washington State University, and founded a group that helps farmers and environmentalists to work together.. He invented a species of wheat used by his neighboring farmers, and raises (what I’m told) some damn tasty grass fed beef. But to really get to know the guy, you have to know the back story:

Goldmark’s father, John, was a popular farmer and state senator in the 1950s who championed public power only to be viciously slandered as a Communist tool by a former Spokesman-Review political editor and a former legislator who had both sided with private power companies. In this fearful time of the Red Scare, John Goldmark was turned out of office and saw his life ruined.

He sued for libel in 1963 and won a huge victory against his accusers. But the stigma and whispers of “communist” played out tragically in 1985 when, on Christmas Eve, a drifter who hung around right-wing fringe groups, murdered Charles Goldmark, his wife and two children — thinking he was John Goldmark.

The savage attacks on his parents (Peter Goldmark was 17 at the time of the libel trial) and the later murder of his brother’s family may have shaped Peter Goldmark and his views of public service and politics.

If anyone has earned the chance to retire to the front porch and stay out of the public eye, it’s Peter Goldmark.

But I don’t think that wouldn’t sit right with him. That’s why he’s running for Lands Commissioner this year:

[W]e agree that we need new and better management of our state’s public forests, our shorelines, our aquatic reserves and our mineral resources. [We] agree that without sustainable management of these natural resources, we risk losing what is so special about our state. We can and must do better—it is time for a change.

I’ve spent most of my life raising wheat and cattle in the high country of Okanogan County. I have served as Director of Agriculture for the state, bred new wheat varieties and been named conservation farmer of Washington State. I will be the first Lands Commissioner to be a conservation award winning and committed manager of our lands.

I offer a new direction and positive leadership.