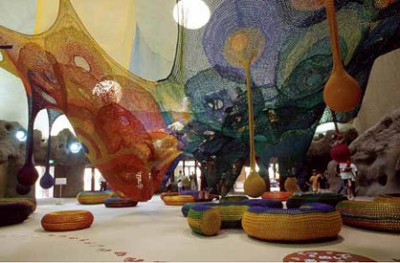 Imagine, say, a Tom Douglas run family cafe, nestled within a "rainbow nest dome" like the one at the Takino Hillside Park in Sapporo-shi, Japan. That's the kinda creative thinking I'm advocating.

In fighting the proposed Chihuly Museum Chihuly-branded glass art gallery, gift shop, cafe and Space Needle-affiliated catering hall on 1.5 acres of Seattle Center land currently occupied by the Fun Forest, it is important to make it clear that we don’t just oppose the proposal, but that we support an alternative that better meets the needs of all Seattleites.

While many have derided the Fun Forest as a rundown, cheesy, underused eyesore, few would argue a downtown with no grade school, no playgrounds, no ball fields and no basketball court, needs even fewer amenities for young families than we already have. But the pro-Chihuly crowd is quick to argue that there is no money available to build alternative proposals, while the Wright family is prepared to commit $15 million to their for-profit venture, including as much as $500,000 a year in rent.

It’s this or nothing the glassoholics warn us, and thus the city would be crazy to turn down such a “gift.”

But there is money available to build the proposed children’s garden and water feature/skate rink on the north end of the site, as well as the really kick-ass playground I’ve proposed for the south end. All we need to do is ask.

Of course, I’m referring to Seattle taxpayers, who have long been generous with their dollars when its going to something they support, and whom I’m guessing would be more than willing to fork over a few dollars a year each if pitched the kinda family oriented redevelopment I envision.

Now, I’m not talking about a full blown Seattle Center Levy; that might be too expensive and too complicated and too much of a temptation for political mischief to make it to the ballot and past voters in a timely manner. No, I’m talking about a very limited levy aimed solely at redeveloping the Fun Forest into an admission-free, world-class, family-friendly attraction filled with amenities for both children and their parents.

For example, in 2008, 59-percent of Seattle voters approved the Parks and Green Spaces Levy, raising $146 million, and costing the average Seattle homeowner an additional $80.78 per year over the six-year life of the levy. I doubt most voters even understood the specifics of what the levy would pay for; we just like the notion of “parks” and “green space,” and so we voted yes.

Now imagine a Really Kick-Ass Playground Levy that would raise maybe only a tenth of that money. Only 8 bucks a year to build something really, really cool that your kids and your grandkids will use again and again, instead of some elitist, $15 admission “museum” you might visit maybe once, but that would lock up and enclose an acre and a half of precious open space for generations.

I don’t think it would take much to sell this levy to voters.

I know there is a majority of council members who aren’t too enthralled with the Chihuly proposal, if not downright opposed, but nobody’s pitched a way to fund an alternative. Until now.